Growing from the Middle 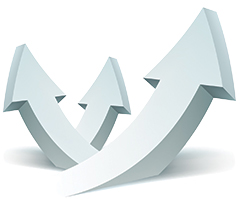 Despite comprising only 1 percent of the total number of commercially active firms in the country, middle market companies have led national job growth over the past five years, employing nearly 53 million workers — more than double the number employed by this segment in 2011. Middle market firms are also contributing $9.3 trillion to the U.S. economy, according to the “Middle Market Power Index” from American Express and Dun & Bradstreet.

Using Dun & Bradstreet’s proprietary database of commercially active U.S. firms, the latest report in the Middle Market Power Index series analyzes the characteristics and economic impact of middle market enterprises — defined as businesses generating between $10 million and $1 billion in revenues — focusing on growth trends over the past five years.

According to the report, while the total number of all commercially active firms declined between 2011 and 2016, the number of middle market firms nearly doubled, with an increase of nearly 87 percent. Middle market firms generate just over one in four dollars (26%) of U.S. business revenues and employ more than one in four workers (27%) in the private sector. Since 2011, middle market companies have outpaced both smaller businesses (less than $10 million in revenues) and the largest companies (more than $1 billion in revenues) in both employment and revenue growth.

“Over the last five years, middle market companies have led the way in economic growth,” says Brendan Walsh, executive vice president for the U.S. with American Express Global Commercial Payments. “This report highlights the often overlooked economic might of these companies, which contribute over $9.3 trillion to the U.S. economy and are growing faster than any other sector.”

Among the 18.9 million firms with less than $10 million in annual revenue, there are roughly one million that generate revenues between $1 million and $9.9 million, signifying the greatest potential to approach the middle market. These firms make up 5% of the population of commercially active small businesses, generate $2.8 million in revenues and employ 28 workers on average. These small businesses that have reached $1 million or more in revenue are more likely to be women- or minority-owned (10% and 6%, respectively) and also more likely retail trade or construction businesses than any other business size group — two segments (women- and minority-owned, and construction) that are gaining strength or are historically strong in Arizona.

Arizona vs. the Nation