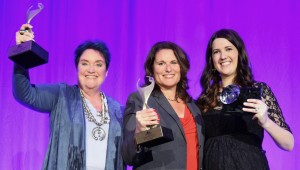 “All of today’s ATHENA Award finalists are powerful leaders who demonstrate what can be accomplished through hard work, determination, vision and empowerment,” said Todd Sanders, president and CEO of the Greater Phoenix Chamber of Commerce. “They embody the spirit of ATHENA and truly understand the value of community service and mentoring others to strive for more. Their passion, perseverance and contributions are an inspiration and make Phoenix a better place. It is an honor for the Greater Phoenix Chamber of Commerce to highlight these women’s achievements and celebrate their leadership, dedication and positive impact on our community.”

The event marks the 28th year the Greater Phoenix Chamber has honored Valley businesswomen. The ATHENA Awards, named after the Greek goddess of courage and wisdom, is a program of ATHENA International, a foundation dedicated to creating leadership opportunities for women.

“I’m thrilled beyond measure and also humbled to be with such an incredible group of women,” said Melissa Sanderson, 2015 ATHENA Businesswoman of the Year Award recipient in the private sector. “There is tremendous value in encouragement, inspiring others and mentoring. I’m so glad that the Greater Phoenix Chamber of Commerce puts such a huge emphasis on mentoring as part of the ATHENA Award. It’s the responsibility of leaders to mentor others, it’s like an arrow shooting towards the future.”

As vice president of international affairs at Freeport-McMoRan Inc., Sanderson is responsible for coordinating activities between the social responsibility and communications groups and engages in strategic planning. Dedicated to the service of others, she advocates for and supports women entrepreneurs and illustrates her dedication to the mentorship of women by helping them to reach their full leadership potential. When asked what advice she would give future ATHENAs, Sanderson responded, “Follow your passion and don’t let fear hold you back. And don’t seek reward, as I’ve found that rewards remarkably come to you often when you least expect them.”

“I’m overwhelmed, inspired and very grateful,” said Leah Fregulia, 2015 ATHENA Businesswoman of the Year Award recipient in the public sector. “I looked out across the ballroom and saw such amazing women. So to be a part of the ATHENA Awards is amazing.” Cultivating talented students and being active within the emerging educational reform movement are just a few of Fregulia’s passions. As CEO for the Arizona School for the Arts, Fregulia’s leadership has established the institution as a top academic school. But Fregulia doesn’t just direct her organization’s mission—she lives it. Her dedication to community service includes promoting high-quality education, arts and culture and the development of a vibrant downtown. Added Fregulia, “One of my primary goals, both in education and in mentoring others, is to help create the leadership of the future. We’re laying the foundation so that Phoenix will continue to be a great city and continue to grow. It’s important to build that pathway for the next generation and to help them succeed.”

“It’s humbling considering the caliber of women I was nominated along side,” said Ashley Kasarjian, counsel at Snell & Wilmer LLP. “I’m so excited to be named this year’s Young Professional ATHENA and I look forward to the challenge of continuing to make our community great.” Ardent and compassionate about bettering our community, Kasarjian believes it’s a moral obligation to offer support and to encourage future leaders to help them get where they need to be. We owe it to the community where we are bringing up the next generation of leaders, she said. When asked what advice she would give future ATHENA Award recipients, Kasarjian said, “Be authentic and be yourself. And invest your time and resources in your community to make it a better place.”

Sanderson, Fregulia and Kasarjian were chosen from among 11 ATHENA finalists, who were selected from a large group of nominations received in August. The following is a complete list of the 2015 ATHENA finalists:

Congratulations to the 2015 Community Legacy Honoree

As a new feature of this year’s ATHENA Awards Luncheon, the Greater Phoenix Chamber of Commerce recognized Ambassador Barbara Barrett as its 2015 Community Legacy Honoree. The Community Legacy Honor recognizes an outstanding female former elected or public official who has dedicated her work and her life to improving the community, supporting women and being an exemplary role model for female leadership. Her work and efforts have left a lasting legacy on her community.

Click HERE for photos from the ATHENA Award reception. Videos of the ATHENA recipients can be viewed at www.phoenixchamber.com/athena2015. Click HERE for the #ATHENA2015 Twitter stream from @phxchamber.v