Grabbing a Slice of the Pizza Segment 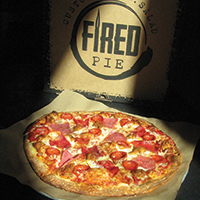 Fresh pizza in four minutes? This is part of the edge the owners of fast-casual eatery Fired Pie feel they’ve found in the popular pizza segment of the restaurant industry. The short cooking time is enabled by real brick ovens that hold a steady 600˚ F and a proprietary method of pressing the dough with a hydraulic press that holds it in place and sears it.

Offering a variety of high-quality toppings, Fired Pie lets customers build their own pizza — or salad. Salads are tossed on the line and served immediately. Pizzas take that four-minute detour to the oven before being served to the customer. Co-owner Fred Morgan emphasizes the “fresh” factor that differentiates Fired Pie from “by the slice” pizzerias where a customer may be able to add toppings but it’s to a pre-cooked slice that is then reheated.

Co-owners Morgan, Rico Cuomo and Doug Doyle, who share extensive experience with California Pizza Kitchen, self-funded their first Fired Pie, which opened six months ago at the Deer Valley Towne Center in north Phoenix and “was profitable from Day 1,” according to Morgan. They have since opened three more, the most recent in early December at Northsight and Raintree in north Scottsdale. A partner stays at each location to oversee training and operations, and to make sure it is executing at all levels, Morgan explains. “It’s four to five months of us being there every day.”

Explaining they have modeled their business on Chipotle, Morgan says their plans are to build a similarly large presence throughout Arizona and they are already eyeing sites in Flagstaff and Tucson.