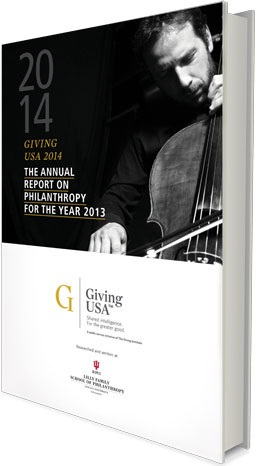 Giving USA 2014 isn’t a magical handbook with superpowers, but the figures and historical insight contained within the report do dispel long-held myths about fundraising. Those executives sitting on nonprofit boards who understand the implications of the report’s facts and figures — and how to use them to their advantage — can optimize their organizations’ philanthropic efforts.

Myth 1: Corporations are the most significant contributors to philanthropy. A common misconception bandied about nonprofit boardrooms is that the easiest way to raise funds is through gifts from big, high-profile corporations. Focusing efforts on that six- or seven-figure gift from a single source will save the nonprofit time and resources, right? Not so fast. Over the past several decades, Giving USA has consistently revealed the opposite is true. Last year, only 5 percent of the $335.17 billion in charitable gifts raised in the United States came from corporations; another 8 percent came from bequests, and 15 percent came from foundations. That means, overwhelmingly, the majority of philanthropy — 72 percent — comes from individuals. That figure grows to 87 percent when combining individual giving, bequests, family foundations and individual or family-donor advised funds.

What that means to the nonprofit is a shift in traditional thinking — especially when taking a closer look at that corporate 5 percent of contributions. When a nonprofit places its bets on securing the “big corporate gift,” it must understand that nearly 65 percent of those corporate gifts are in-kind donations of goods and services. Furthermore, a majority of those in-kind gifts are earmarked for causes outside of the United States, often in the form of pharmaceutical aid to other countries. This reality leaves little room for contributions at home, let alone a six- or seven-figure corporate dream gift.

A similar misconception is it’s better to narrow the target, focusing on the wealthiest, most successful businesspeople in the country. They’re individuals, and individuals contribute the greatest amount of philanthropic dollars, right? Yes, but unless someone within the nonprofit organization personally knows Bill Gates, Warren Buffett or Oprah Winfrey, it’s not necessarily an advisable strategy. Nor is it advisable to expect to raise the majority of funds through golf tournaments and gala events. Events require a great deal of staff and volunteer time to produce and net surprisingly little revenue when compared to outright giving.

Instead, nonprofits should consider targeting individual donors and cultivating those relationships for optimal return. The figures in the Giving USA report don’t lie. Individuals account for the vast majority of charitable contributions, giving more than $240 million in outright gifts during 2013.

When it comes to all types of giving — individuals, corporations, foundations — it’s not just wealth or giving capacity that counts. Nonprofits must know the person or institution they are engaging. The nonprofit should be able to answer the question, “What type of proposal serves both our visions and missions?” Those nonprofits whose priorities closely align with their donors’ always have a competitive advantage.

Myth 2: Nonprofits must focus fundraising efforts in a single area. It is common to assume that human services organizations should seek funds from individuals, foundations and corporations with an interest in basic health and human service functions. Or that arts organizations should target like-minded creatives to support the nonprofit’s artistic pursuits. But what if nonprofits studied past and current trends in philanthropic giving, using that insight to adjust the way they think about themselves and their donors?

Consider this statistic from Giving USA: Contributions to educational endeavors grew the most last year, accounting for 16 percent of all charitable giving. Institutions that may have a primary emphasis in health or human services may also have an education mission or offer education-related programs to train constituencies. Shifting focus to this popular area of growth might result in new opportunities; for instance, the nonprofit might identify a new contributor whose educational priorities align with the secondary educational work of the nonprofit. This could be the first building block to a meaningful donor relationship.

Understanding why shifts in giving have taken place historically can also aid the nonprofit in its long-term planning strategies. Take, for instance, the increased support of human services contributions in 2008 when the Great Recession crippled the U.S. economy. Individuals, corporations and foundations moved their philanthropic support away from arts and culture, as well as animals and the environment, to focus on meeting social needs in the human services sector. With the recent stabilization and strengthening of the economy, the pendulum is swinging back, again, to arts and culture and the environment. Understanding these giving trends and personal giving habits can help the more agile nonprofits adjust their strategies in anticipation of historic giving behaviors and future giving trends.

Indeed, today’s board members must think creatively about all the pieces of the giving pie: education, human services, health, public-society benefit, arts/culture/humanities, international affairs and environment/animals. Very rarely does an organization fit squarely into only one of those sectors. Successful nonprofits align their various priorities with funders and their specific interests, all while considering their own strengths outside the traditional areas of service. This kind of creativity must be carried into grant writing, relationship building, and the identification and cultivation of new groups of contributors.

Myth 3: The number of nonprofits is decreasing, making more resources and funds available to existing nonprofits. While it is true that nonprofits have decreased slightly over the past year, more than 1.52 million nonprofits still exist in the United States. That translates to continued competition for finite resources. Philanthropy alone cannot close the financial gap in the nonprofit sector caused by the rapid decline in government funding. Those nonprofits effectively positioned to optimize philanthropy, along with for-profit revenue ventures as part of their business plans, will be the most successful. (See our July In Business Magazine article about revenue diversification.)

Giving USA is the definitive longitudinal research study on U.S. trends and issues in philanthropy, compiled now for nearly 60 years. The annual study provided by The Giving Institute, and based on research from the Lilly Family School of Philanthropy at Indiana University, is a valuable planning tool for corporate executives who want to bring strategic business skills to the nonprofits they serve. The Phoenix Philanthropy Group is the only member of the Giving Institute in the Southwest approved to conduct Giving USA preview events, which have taken place in Arizona, Nevada and California.