You are here: Home / In Business / Eaton Drives Success with Mobility Options for the Disabled
In Business  |  From the Top  |  September 2011

Eaton Drives Success with Mobility Options for the Disabled 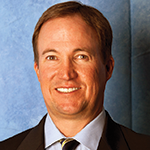 With the Americans with Disabilities Act of 1990 newly passed, a business manufacturing ADA-compliant vehicles seemed like a good investment, explains Doug Eaton, president of Phoenix-based Vantage Mobility International, which manufactures and distributes wheelchair-accessible full-size and minivan conversions. He and his brother David purchased five-year-old VMI in 1992, excited about the increased awareness of social issues fostered by the law that, among other provisions, requires entities in public transportation to have 20 percent of their fleet wheelchair accessible.

“We saw an opportunity to bring wheelchair-accessible product to government and transportation agencies,” says Eaton. But distribution decisions and family tradition led them instead to the personal use market — selling to the physically challenged end-user — which has, in fact, turned out to be the stronger of the two markets.

“We thought the best way to grow the business was to find a channel to distribute the product — lower the overhead of inventory and carry the responsibility in the local market of meeting with the consumer. It gave us the footprint to grow a lot faster.” The company deals with practically every major mobility equipment dealer in the U.S., according to Eaton. VMI also works with the Veterans Administration and vocational rehabilitation practices, but Eaton notes these are third-party sponsors. “We do not receive any Medicare assistance. These are all private pay.” For the Eaton brothers, an additional plus to this business model is that it is more relationship-based whereas government contracts are more price-based. Relationship-based was the style of business they had grown up with, Eaton explains, in a family that was “always in real estate and real estate development.”

With no knowledge of manufacturing at the outset, Eaton admits the learning curve was steep. But he and his brother were eager to invest sweat equity along with capital. David learned the competencies required of the electromechanical and metal fabrication operation and became the technical expert. Taking the sales side, Doug became the sales and growth expert. “The roles fit our personalities well,” he says.

Customer service remains a cornerstone of the company. With a belief that their product transforms people’s lives, Eaton says, “We are the industry-leading customer service.” The Eatons also empower their 240 employees by actively involving them in company decisions. Explains Eaton, “We have a town hall meeting every two weeks. We open our books to our employees, and they share in the company’s profit and loss.” The Eatons also regularly recognize deserving employees with a plaque, a picture on the wall, and an opportunity to speak to the company and, as Eaton puts it, “share the ‘secret sauce’” they brought to their work.

The company continues to evolve its product to meet the needs of the physically challenged. Product managers run focus groups and surveys with the customers to keep abreast of their needs. And, says Eaton, “The Internet has led to massive awareness; customers recognize all the choices.” Every conversion includes what Eaton calls “necessities,” “nice-to-haves” and “delighters.” Although focused on quality throughout, Eaton says it’s the delighters — viewed as a value although expensive and not necessary — that “drive the behavior of customers to the dealer showrooms.”

While 70 percent of customers purchase from dealer stock, 30 percent will place an order to customize the options or color on either of the car makes that VMI works with. “We carry Honda and Chrysler because both have very good reputations in the minivan industry.” VMI purposely carries one foreign and one domestic, Eaton explains, so there is back-up in case of supply chain issues — such as the 50 percent reduction in the United States’ Honda allocation that resulted from this year’s tsunami in Japan.

Each conversion takes about four days. “It used to be six,” says Eaton. But that was before VMI implemented Lean Six Sigma — a combination of Lean Manufacturing, a program directed toward eliminating waste in the manufacturing process, and Six Sigma, a program directed toward reducing variance. The switch in first quarter 2008 from a philosophy of “continuous improvement” to Lean Six Sigma — studying problems to find root causes and, therefore, developing real solutions rather than a “Band Aid” fix — has produced breakthrough results in defects, profits, manufacturing rates and employee morale, according to Eaton.

From the 60 to 70 conversions per year when the Eatons started with the company, VMI now produces nearly 3,000 per year and, relates Eaton, is the second largest in the industry.