Fast, simple and comfortable. In a nutshell, Doughbird — the newest concept in our midst from restaurateur Sam Fox — delivers a quality option for businesspeople fitting lunch into a busy day. The large dining room welcomes with an atmosphere that is an unusual amalgam of the contemporary warehouse vogue with cafeteria-style tables and chairs below exposed ceiling beams and ductwork, and a sense of expansive airiness from the broad windows and high roof. Team-style service guarantees patrons have their needs covered expeditiously, but with no sense of being rushed out for the sake of expediency. 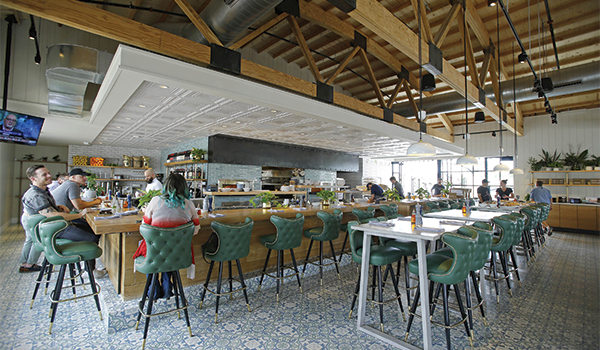 The name combines a reference to two favorite foods: pizza and chicken. Pizzas run a wide gamut from the familiar Margherita to familiar-with-a-twist Wild Mushroom (made with black truffles, swiss chard, fontina cheese and rosemary) and Barbecue Chicken (made with charred corn, red onion, jalapeño pesto sauce and white cheddar cheese) to innovative offerings such as Brussels Sprout (made with melted sweet potato, glazed bacon, smoked mozzarella cheese and pistachios). And an ironically titled, given the restaurant’s name, The Aviator (made with pepperoni, Italian sausage, Nueske’s bacon, organic tomatoes and mozzarella cheese). Chicken shows up throughout the menu, from the salads to sandwiches to full-on entrées that come with a side dish and choice of tempting sauces.

There’s more to the menu, as well, from an assortment of appetizers (including Buffalo Chicken Wings, of course) to the Prime Rib Dip to the Oven Roasted Fresh Fish entrée that changes per availability. Plus a nice selection of wine, beer and cocktails that also elevates Doughbird to a high level in the fast-casual market.

Editor’s Note: “Doughbird” evokes the nickname “Doughboy,” which was a common appellation for American troops in WWI that likely evolved from an earlier reference to foot soldiers. “Doughboy” also has a culinary etymology as a type of dumpling or doughnut.