You are here: Home / In Business / Disruptive Innovation: The Quintessential David and Goliath Story
In Business  |  Feature  |  September/October 2015 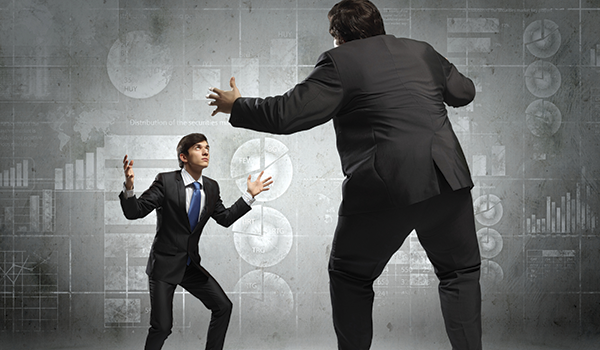 Disruptive innovation can be deliberately engineered, but the term “disruptive” is a relative concept. As we apply it to business, the same product can be disruptive if produced by one vendor, while from another, it can be sustaining. Depending on the alternatives it’s being compared to, it can be either disruptive or sustaining, and sometimes both at the same time.

The theory is simple, and can also be confusing, but the world-changing economic power of disruption is undeniable: Learning how to control and harness that power for business opportunity offers tremendous promise.

And there’s something about being human that makes the story behind the story captivating. It’s the modern David and Goliath story, an historic tale of battle that has fascinated us for millennia.

[David] grabbed his staff and chose five smooth stones from the streambed. He put them in the pocket of his shepherd’s bag and with sling in hand went out to [Goliath].

The Philistine got closer and closer to David, and his shield-bearer was in front of him. When the Philistine looked David over, he sneered at David because he was just a boy; reddish brown and good-looking.

The Philistine asked David, “Am I some sort of dog that you come at me with sticks?”

And he cursed David by his gods. “Come here,” he said to David, “and I’ll feed your flesh to the wild birds and the wild animals!” …

Goliath got up and moved closer to attack David, and David ran quickly to the front line to face him. David put his hand in his bag and took out a stone. He slung it, and it hit the Philistine on his forehead. The stone penetrated his forehead, and he fell facedown on the ground. And that’s how David triumphed over the Philistine with just a sling and a stone, striking the Philistine down and killing him — and David didn’t even have a sword!

—from the Old Testament, in the First Book of Samuel, Common English Bible translation

David and Goliath is one of the most enduring stories of all time. Every culture has a version of it — a defenseless boy takes on a giant, battle-hardened warrior more than twice his size and surprises and defeats him with a shepherd’s sling and a single stone.

The underdog legend persists today as a powerful secular myth that we enjoy hearing and telling over and over again. It’s the unranked college team knocking off the No. 1 seed. It’s the 1960s hippy youth stuffing flowers in the barrels of National Guard rifles to protest the Vietnam War, and eventually bringing the military industrial complex to its knees. It’s Martin Luther King Jr. standing up against racial injustice with peaceful marches that changed the country. It’s the Oakland Athletics hiring a statistician to rebuild a decimated team with an under-funded payroll from the rest of the league’s under-valued and poorly paid cast-offs based on a single stat (on-base percentage) and rewriting how winning Major League teams are assembled (Moneyball).

Today, the mythic tale is of disruptive innovators. Disruptors take on the giants of industry with seemingly outclassed products, yet consistently win and become the new incumbents. Netflix drives the behemoth Blockbuster out of business, and is now poised to knock off the giants of TV and cable. Apple, a computer company on the brink of bankruptcy just a few years earlier, and a complete outsider to the phone industry, takes on Blackberry and Nokia and the whole mobile industry, creating a business around the iPhone that would be the world’s largest company on its own if Apple had no other products, relegating the previous giants (both of whom were themselves recent industry disruptors) to the dustbins of history. Amazon, Google, Uber, Airbnb — unheard of a generation ago, these are today’s household names that continue to change the way the world does business in one industry after another.

Disruption isn’t as common as one might think. It’s easy to think disruption is all around us, but only relatively few innovations are truly disruptive and follow the patterns defined by disruption theory, notwithstanding all the hype and insistence by marketing hucksters who seem to want to make disruption a meaningless buzzword. Of the thousands of startups born every day, only a few introduce game-changing business models supported by innovative products that disrupt markets.

Think about it — beyond the names above, how many more can you identify? Pundits would have us believe that every new tech company is disruptive, but that’s just silly — the vast majority of startups fail, so how could they ever disrupt a market?

So why is disruptive innovation such a popular idea?

One reason we see the word “disruptive” almost daily is that it is the quintessential David and Goliath story. An unheard-of startup with an inferior product targeting unmet needs of undesirable users wins, despite the resources, technology, skills and manpower of an entire industry lined up against them. We love that story.

What we love even more is the economic growth and benefits that disruptors create. They are critically important to creating new, good-paying and interesting jobs and improving the quality of service an industry delivers to its customers while reducing costs. It’s the real reason that disruptors are able to tackle entrenched competition that often has regulatory muscle and infrastructure on its side, yet still overcome the odds. Not only do they improve our lives, research shows that these few disruptive innovators are responsible for virtually all real growth in the economy after accounting for inflation.

Whether we are a consumer, investor, or entrepreneur, everyone wants to cheer for the next David, ready to slay the giant.

How to Identify the Real Disruptors

Clearly, it matters whether products have disruptive potential or not, but some say we can tell who the real disruptors are only in the rear view mirror. Is that really the case? Does disruption theory fall apart in the real world, serving only to label winners after they’ve disrupted? Or does it hold predictive value that tells us where to invest and how to create disruptive innovations intentionally? Is it a myth, or a model that anyone can apply if they understand the principles?

Going Back to First Principles

It’s still less than 20 years ago that Harvard business professor Clayton Christensen coined the term “disruptive innovation” and wrote his seminal book The Innovator’s Dilemma. In that time, our understanding of disruption has evolved, though the base theory has held up remarkably well. We know that Steve Jobs was deeply influenced by Christensen’s book when he led Apple from the precipice of bankruptcy to become the world’s most valuable company in less than 15 years, and that a handful of companies like Netflix have used the theory to guide their business strategies.

So how do we apply that model and unlock the secret of intentional disruption? The key is realizing that the disruptive innovation model is a pattern, like the ripples in a pond of water. The ripples tell us a stone was thrown, but trying to create the ripple pattern without knowing what caused it is a fool’s game. For guidance in creating disruption on purpose, or in knowing when markets are ripe for disruption or predicting when a startup has a high probability of becoming a disruptive innovator, we need to know what causes the ripple.

The clue we need lies in one surprising and non-obvious factor that all disruptive innovations share: Every disruptor offers a product that uniquely addresses a market scarcity and, by doing so, changes the economics of the industry it targets.

Disruptive innovation is one of most misused and overused terms in our business lexicon, precisely because we love the David and Goliath story. How much do we love underdogs who win? We have almost as many synonyms for underdog as we do for sex. But that doesn’t mean disruption isn’t real, or isn’t critically important. Have you got what it takes to become a disruptor?

Paul Paetz, author of Disruption by Design: How to Create Products that Disrupt (and then Dominate) Markets, is CEO of Innovative Disruption, a boutique consultancy that advises startup companies, helping to bring disruptive products to fruition and market success. Prior to forming Innovative Disruption, Paetz had more than three decades of experience working with innovative startups in executive roles in sales, marketing and product management, and as a disruption consultant at The Disruption Group. Paetz is creator of the Disruption Report Card, a tool that scores disruptive potential, and author of the popular blog, “Disrupt This.”