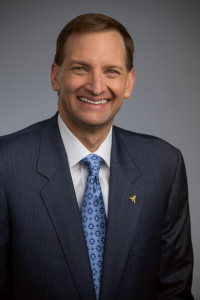 Tire, the world’s largest tire and wheel retailer, has named Michael Zuieback as its CEO, effective January 12, 2015. Zuieback previously served as Discount Tire’s president and will succeed outgoing CEO Tom Englert, who will remain an advisor to the CEO.

“It is time for us to pass the torch to the next generation of leadership,” said Bruce T. Halle, founder and Chairman of Discount Tire. “We are grateful for Tom’s tremendous service and look forward to his contributions for years to come. Tom will remain an important member of the board of directors as advisor to the CEO.”

Zuieback has been with Discount Tire for 14 years, first acting as the executive vice president of Strategic Planning before becoming the company’s president. As president, he was in charge of corporate strategy for the company at the executive and board level. Zuieback helped initiate the company’s cross-dock logistics procedure with Englert, who has served Discount Tire for nearly 40 years. Prior to joining Discount Tire, Zuieback was the treasurer of Asia Pacific for Johnson Controls, senior manager of Foreign Exchange & International Finance for Sara Lee Corporation and credit analyst at First America Bank. He graduated from Thunderbird School of Global Management with a Master’s in International Business in 1991. Zuieback also earned a Bachelor of Science in Business Administration from Central Michigan University.

“Over his tenure, Zuieback has demonstrated a passion for preserving and growing the ‘Discount Tire Dream.’ He has been influential in planning for the future and has helped the company adapt an integrated way of thinking,” added Halle. “We take pride in originating our growth from within. Zuieback has been fundamental in taking us to where we are today and his vision will help us reach new heights.”

Englert joined Discount Tire in 1975. His dedicated efforts have helped Discount Tire expand from 23 stores to more than 900 stores today. Early in his career, after spending six years as a store manager, Englert helped Discount Tire grow as an assistant vice president in both Arizona and California and then as vice president of Colorado. After achieving record success, he joined the Corporate Office as senior vice president of Store Operations, where he developed Discount Tire’s Certified Satisfaction training program and continued to help the company achieve record earnings. He also initiated a synchronized supply chain, connecting disparate groups together to better serve customers. Englert was named the company’s second CEO in 2004, succeeding Gary Van Brunt. Under Englert’s leadership as CEO, Discount Tire’s annual sales have grown from $1.8 to $4.3 billion and profits have quadrupled.