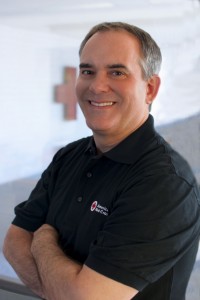 The American Red Cross Grand Canyon Chapter has announced that David Emerson has been officially named regional Chief Executive Officer of the organization in Phoenix, where he had served as interim CEO for about four months earlier this year.

He assumed his new duties on Tuesday, Nov. 12 at the Grand Canyon Chapter, which ranks as the fifth-largest chapter nationally, serving the more than 5.1 million people in Apache, Coconino, Gila, La Paz, Maricopa, Mohave, Navajo, Pinal, Yavapai and Yuma counties. It has almost 30 staff members, 500 adult volunteers and 400 youth volunteers who aid their neighbors by ensuring they have a safe place to sleep, food, clothing and comfort following natural and manmade disasters.

Emerson’s prior Red Cross experience includes being the Chief Operating Officer of the North Texas regional grouping where he distinguished himself as a leader with expertise in strategic planning, change management, team building and fund development.  He managed program activities, volunteers and business operations.

Steve Rizley, Grand Canyon Chapter board chairman and Southwest Region senior vice president and general manager for Cox Communications, said: “David’s previous stint as interim CEO was well received by our board and in the community. We are delighted that he is joining Grand Canyon Chapter in this key leadership role.”

Prior to the Red Cross, Emerson served in a variety of U.S .and international corporate management and consulting roles in both non-profit and for-profit sectors. His private sector experience includes more than 20 years in insurance, financial services and retail.

He earned his bachelor’s degree in management from Henderson State University; and his master’s degree from Columbia International University.

“I’m honored and humbled to accept this position and look forward to serving the needs of our community,” said Emerson. “I look forward to continuing to support the Grand Canyon Region through the vital work the American Red Cross does every day.”