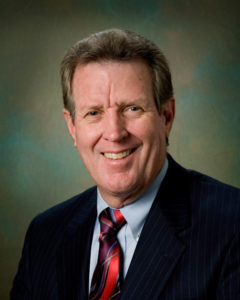 Dave Crawford, the recently retired CEO of Sundt Construction, has been honored with the 2017 Legacy Award from Engineering News-Record, Southwest.

Crawford began his career with Sundt Construction in 1968 as a field worker while he earned his civil engineering degree from the University of Arizona. He rose through the ranks, filling a variety of roles including project engineer, superintendent, project manager, project director, division manager, operations manager, president, COO and ending his career after six years as CEO, including five as President & CEO.

Crawford has been a leader for the construction industry and Arizona, and participated in the drafting, lobbying, education and passage of legislation in favor of alternative project delivery methods. In 2000, the Arizona Legislature passed House Bill 2340, opening the door to several alternate delivery methods and qualifications-based selection for public owners. He has participated as a national speaker on the topics and is involved in other states and on a federal basis to accelerate the movement toward teaming solutions to design and construction challenges within the industry.

“Dave symbolizes all that is great about our business, and his legacy will stand for generations to come,” said G. Michael Hoover, who became Sundt’s President & CEO last October.

Crawford maintains an active community presence and remains supportive of a number of local and state organizations including Greater Phoenix Leadership, CEOs Against Cancer, the Real Arizona Coalition, YMCA of Phoenix and Expect More Arizona.

The Legacy Award from Engineering News-Record, Southwest recognizes individuals who have achieved a lifetime legacy of service to the architecture/engineering/construction profession and community. They are professionals who have gone above and beyond their duties for decades, making significant contributions to the industry and profession.

About Sundt
Sundt Construction, Inc. (www.sundt.com) is one of the country’s largest and most respected general contractors. The 127-year-old firm specializes in transportation, industrial and building work and is known for its commitment to quality and innovative approach to construction services. Sundt has offices throughout Arizona, Texas, California and Utah and is 100 percent owned by its approximately 1,600 employees. The company is consistently ranked among the Best Places to Work by business publications in multiple cities and in 2016 it was named the nation’s safest construction company by the Associated General Contractors of America for the second time in a decade – an honor no other contractor can claim. Sundt’s charitable arm, the Sundt Foundation, recently crossed the $7.6 million mark in grants made to hundreds of nonprofit organizations across the country.