You are here: Home / In Business / DaniLeigh Kicks Off Monster Energy Outbreak Virtual Tour
In Business  |  Live and Learn  |  May 29 2020 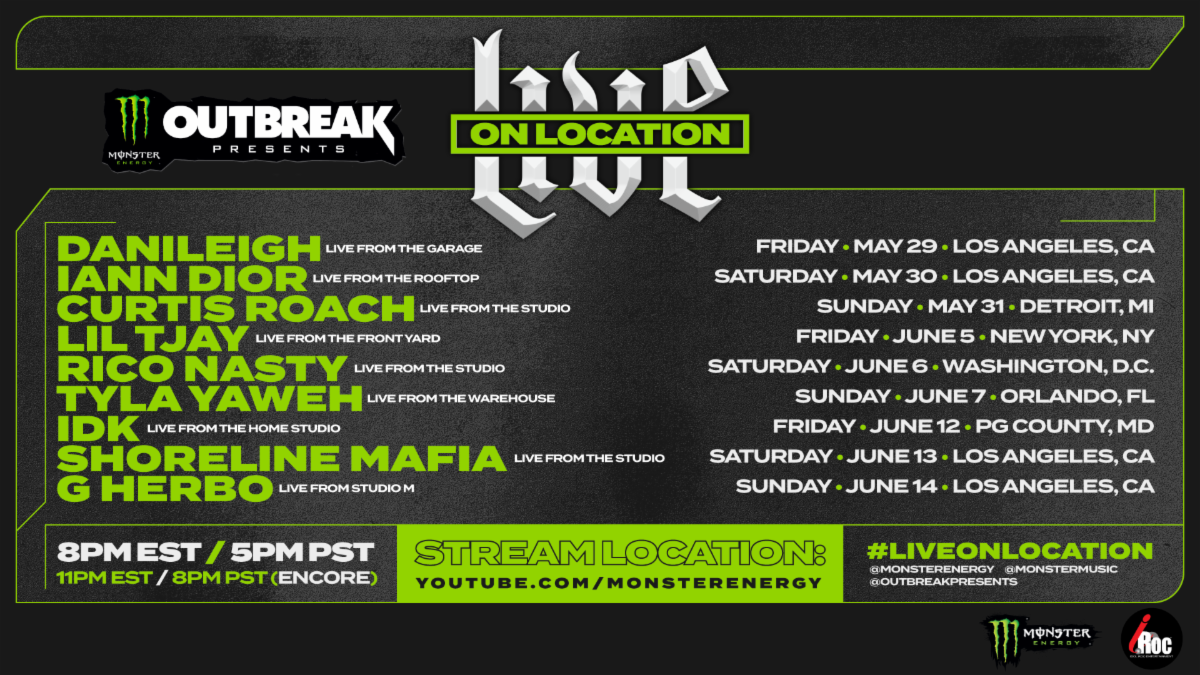 Since 2011, the Monster Energy Outbreak Tour has been the leader in showcasing the biggest new names in music each year amidst their culture-impacting, breakthrough moment, and – for the first time ever – is now set to launch a virtual series customized for fans during quarantine: Monster Energy Outbreak Presents: LIVE ON LOCATION.

Debuting on May 29th, LIVE ON LOCATION consists of nine episodes each featuring top breakout hip hop talent performing from various locations with enhanced production direct from the artist.

Taking place on Friday, Saturday, and Sunday at 8pm EST / 5pm PST over three consecutive weekends in May and June, LIVE ON LOCATION will elevate the at-home livestream experience from bedrooms and basements to garages and rooftops while also offering a behind-the-scenes look at what these artists are up to during quarantine. The series will be hosted by and include interviews from some of the hip hop industry’s leading on-air personalities such as Power 106’s DJ Felli Fel and Hot 97’s DJ Saige. Catch all the action on Monster Energy’s YouTube channel – youtube.com/monsterenergy.

Outbreak Tour Founder/Producer Steven Ferraro shared his excitement at the launch of the explosive new virtual series. “Even though touring is currently prohibited, Monster Energy Outbreak will continue its tradition as a source to deliver fans live performances and access to this year’s breakout artists.”

Rising R&B/pop sensation DaniLeigh will kick things off from her garage in L.A. for the first LIVE ON LOCATION stop as she celebrates the release of her new single, “Dominican Mami,” on Friday, May 29th. The Dominican-American singer, dancer, and rapper exploded onto the scene at just 18 years old when she directed the music video for Prince’s single “Breakfast Can Wait.” Known for her fiery choreography, DaniLeigh debuted on the Rolling Stone list of Top 25 Breakthrough Music Artists in 2019 after earning gold with her breakthrough single, “Lil Bebe.”

“I’m excited to release my new single ‘Dominican Mami’ as I kick off the Monster Energy Live on Location digital series from the garage in LA on Friday, May 29th!” says DaniLeigh.

The opening weekend will continue with Puerto Rico native singer/rapper Iann Dior performing live from an L.A. rooftop on Saturday, May 30th and Curtis Roach, the viral breakout sensation of quarantine, on Sunday, May 31st live from the studio in Detroit.

With in-person live events currently shelved due to the coronavirus pandemic, Monster Energy Music has been intensely focused on supporting its community, hosting programs such as the #CrushQuarantine initiative that encouraged Monster Energy musicians, street artists, and Up & Up Festival ambassadors to share photos and videos of how they were getting creative while staying safe at home. Monster Energy Outbreak Presents: LIVE ON LOCATION continues this focus, offering a global platform for its artists to continue to perform, connect with current fans, and reach out to listeners hungry to discover explosive new music during this time.

Adds DJ Felli Fel, “The Monster Energy Outbreak brand has always been a tastemaker in music, so it’s not surprising that they made the necessary pivot during these times to continue who they are and give fans what they want.”

Most companies spend their money on ad agencies, TV commercials, radio spots and billboards to tell you how good their products are. At Monster Energy, we chose none of the above. Instead we support the scene, our bands, our athletes and our fans. We back athletes so they can make a career out of their passion. We promote concert tours, so our favorite bands can visit your hometown.