The bottom fell out, of course, on many U.S. consumer spending categories during the month of March. But others, like grocery, drug and discount retailers, actually climbed significantly last month as consumers cooked at home and stocked up their pantries and medicine cabinets for an extended stretch of sheltering in place. Meanwhile, consumers were doing much more of their shopping online, as online sales climbed dramatically faster than in-store sales in virtually every retail category.

Commerce Signals, a Verisk Financial company and leading source of U.S. retail payment insights, has analyzed the impact of COVID-19 on a variety of B2C companies and categories during the first quarter of 2020. The analysis leverages anonymized consumer credit and debit spending behavior dataset that includes 40 million U.S. households. Those insights, which are the most extensive and in-depth in the industry, highlight the dramatic impact the virus has had on a wide range of consumer-facing businesses.

The hardest hit categories were in travel, hospitality and restaurants. Compared to the same period a year earlier, card payments in March to Airlines were down 66.6 percent; Hotels and Motels, 52.2 percent; Auto Rental, 35.9 percent, Other Transportation, 56.8 percent; and Travel Agencies, 69.5 percent. Restaurants and Bars were down 36.0 percent in March, compared with March of 2019. (See Figure 1)

But there were winners as well. Grocery stores saw payment card sales climb by 28.8 percent during March, compared to a year earlier. Discount or mass merchant stores, including names like Walmart and Target, were up 16.3 percent, and drug stores grew payment card sales by 10.1 percent. Hardware store card revenues were up 2.7 percent. Wholesale retail, which includes Club stores and Amazon, was up 11.7 percent in March, as compared to the same period of 2019.

Online sales in these growing retail categories all increased faster than in-store payments. For example, in-store grocery sales were up 26.8 percent in March, compared to a year ago, while online grocery sales grew 64.5 percent in the same year to year comparison. In-store card payments to discount/mass merchant retailers climbed just 1.9 percent for March, but on-line payments jumped 62.7 percent. In the last week of March, in-store payments to discount/mass merchant retailers fell 24.8 percent compared to a year earlier, while payments for online sale climbed a whopping 121.3 percent. In other retail categories that declined during March, online sales fell much less than in-store payments and in some cases grew compared to the same period in 2019. (See Figure 2.)

Commerce Signals also conducted analysis of COVID-19’s impact on consumer spending in major cities across the United States. Among regional differences, grocery, discount and drug store sales increases were significantly greater in Los Angeles than in Chicago, Dallas and New York. However, the decline in Hotel and Motel revenue was greater in L.A. than in those other cities. 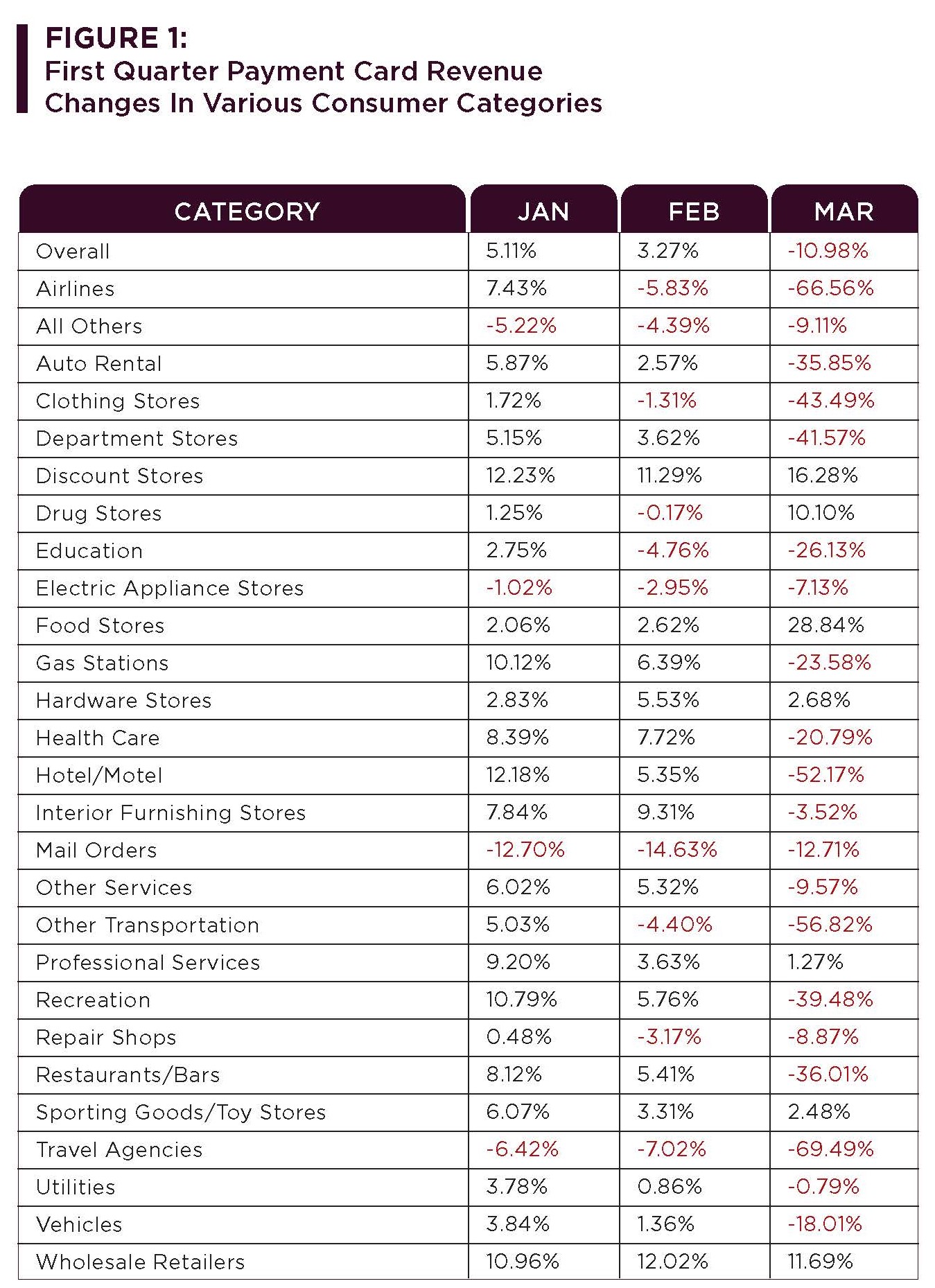 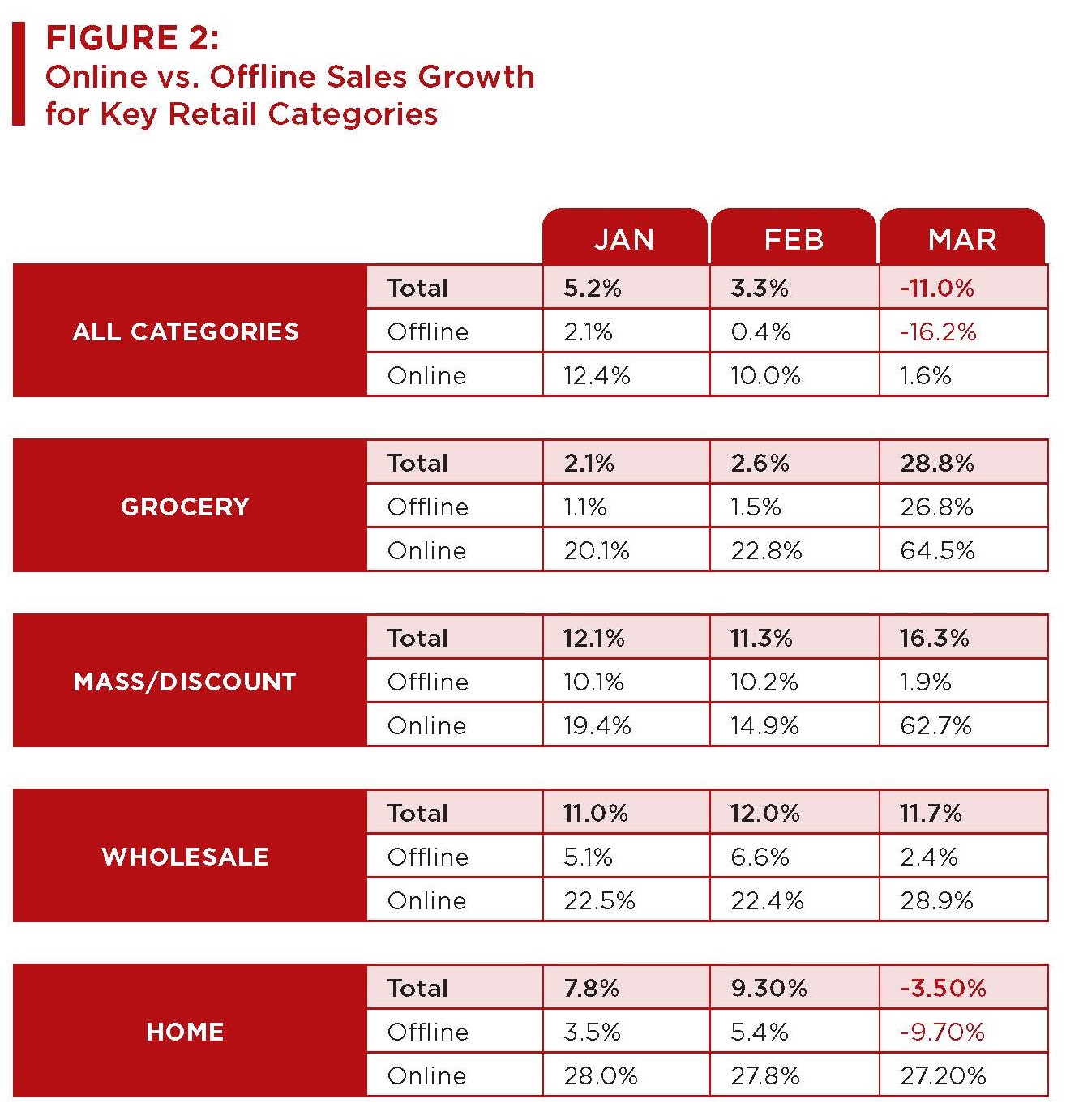 Commerce Signals, a Verisk Financial company, is a leading source of U.S. retail payment insights and analytics. The company has a unique, continuous and anonymized view of the credit and debit card spending behavior from 40 million U.S. households. Commerce Signals offers retailers and other direct-to-consumer companies powerful insights to understand customer and competitive dynamics outside their business, improve decision making, and increase marketing spend efficiency. Its insights and measurement solutions are used by some of the largest retailers in the country.