You are here: Home / In Business / CO+ECHANGES: Global Collaboration
In Business  |  Briefs  |  January 2015 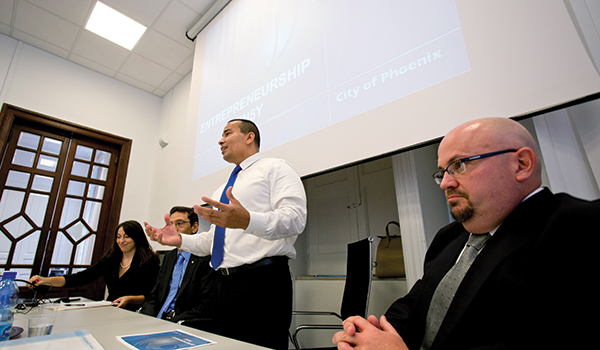 CO+EXCHANGES, an Arizona nonprofit launched in September of 2014 and operating via the CO+HOOTS Foundation, is the first co-working and entrepreneurial cultural exchange program. Designed to bring together the most innovative entrepreneurs and co-workers, it is centered on a wide variety of goals, from driving economic development internationally and promoting worldwide business collaboration to social change and community growth. “We believe young talent today has a very strong ‘give back’ desire,” says CO+HOOTS co-founder and executive director Kristin Romaine of the inspiration behind the program. “We wanted to provide a vehicle for spreading this message to others around the world by working side by side with them on community issues. We want to create a network of global innovators who are banding together their talents to change the world via local and global talent working together towards solutions.”

Phoenix is one of eight host cities among which collaborations have been established. Others include Tucson, Arizona; Hermosillo, Mexico; Sao Paulo, Brazil; and Catania, Italy. Local entrepreneurs and business owners are encouraged to participate in the global exchange, traveling with the “CO+EXCHANGERS” internationally and exercising their expertise in their given field to better a local nonprofit, community program or issue in the hosting city. There is no fee to join and travel is covered by CO+EXCHANGES; however, individuals have to pay for meals during the exchange.

Speaking of Phoenix as a host city, Romaine says CO+EXCHANGES’s goal is to “showcase Phoenix in a positive light on a global platform.” Describing the organization’s relationship with local city government as “unparalleled,” she says, “We want people to know that Phoenix is a place where entrepreneurs can thrive and that we have local expertise that is at a global caliber.”