You are here: Home / In Business / Cigna Employees Go for Spin to Raise Money for the March of Dimes
In Business  |  Philanthropy  | 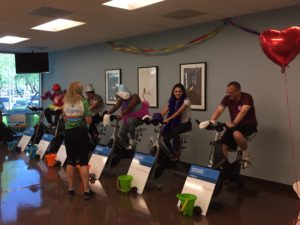 A total of 70 employees rode throughout the day while their co-workers cheered them on and donated money to the cause. Employees who donated money could have riders do sprints and increase resistance on their bikes. They could also donate money to have riders wear costumes while they ride. This is the third year employees organized the spin-a-thon.