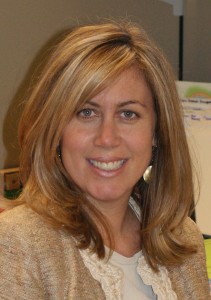 Kate Wells has been named Chief Executive Officer of the Children’s Museum of Phoenix, it was announced today.  Kate will assume her post at the helm of one of the top 10 children’s museums in the country on December 2nd.

Kate is a co-founder of the Children’s Museum of Phoenix, serving as one of the original members of the grassroots campaign that led to the Museum’s opening in 2008, and leading the capital campaign raising $12.3 million.  From 2001 to 2009, she held the position of Director of Development and Communications for the Museum as well.

In 2009, Kate took a sabbatical from the Museum to travel around the world with her husband and two children. Returning from her world tour, she joined Eight, Arizona PBS as Associate General Manager, Marketing and Development. Eight specializes in the education of children, in-depth news and public affairs, lifelong learning, and the celebration of arts and culture and consistently ranks among the most-viewed public television stations per capita in the country. During her tenure at Eight, Kate oversaw 51,000 current donors (realizing a 22% increase during her tenure) utilizing one of the most comprehensive and complex development portfolios in Arizona.

“The search committee was extremely thoughtful and thorough in our search for a new CEO for the Children’s Museum,” said Susan Wissink, Chair of the Museum’s Board of Directors. “We knew that we needed someone who would be able to take this already successful Museum to the next level, and who has a passion for the education of young children, a vision for the future and an understanding of the important role that the Museum plays within the community. We are thrilled that we found all of those things with Kate.”

“It is both an honor and a privilege to be named CEO of the Children’s Museum,” said Kate Wells.  “The Museum already does a tremendous job providing fun, hands-on, educational experiences for the children of Arizona and I look forward to continuing that good work.  Moving forward, I am also excited to help the Museum reach its full potential as a partner with parents, teachers, schools, and community organizations to forward the early childhood education agenda.  The Children’s Museum serves a unique role in our community – the champion for children – and I am thrilled to lead the charge.”

Kate Wells holds a Bachelor of Science degree in Political Science from San Diego State University and is a graduate of Arizona State University’s Non-Profit Management Institute.  She has been an award winning community volunteer and activist working with the Girl Scouts Arizona Cactus-Pine Council, as Social Venture Partners Fast Pitch Mentor, the ASU Downtown Advisory Council, and downtown historic neighborhoods.  A number of other non-profit boards have benefited from Kate’s high energy – among them the Miracle Garden and the Chris-Town YMCA.  She also co-chaired a $2.2 million Department of Justice “Comprehensive Community Grant” involving 17 private, public, and non-profit organizations.  Kate was also once proprietor of the Blue Bottle Café in central Phoenix. Born in Miami, Florida, Kate lives in Phoenix with her husband and two daughters.