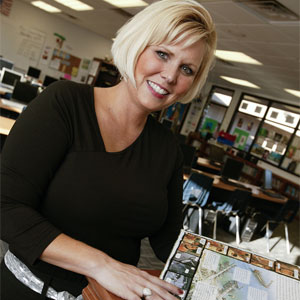 Arizona Charter Schools is pleased to announce that its founder, Raena Janes, was honored with the bronze Stevie Award for Women in Business, for female Entrepreneur of the Year in consumer services for businesses with up to 2,500 employees. The award was announced Nov. 8 in New York City.

Established in 2002, the Stevie Awards mark achievement throughout the world of business. The Women in Business Awards are the world’s premier awards for women executives, entrepreneurs, and the organizations they run. Like the Olympics, the awards given are gold, silver and bronze.

The bronze Stevie is the latest award for Janes, 40, who is founder and director of seven Arizona charter schools: La Paloma Academy, with three Tucson campuses; Heritage Elementary School in Glendale and Williams; and Liberty Traditional Charter School in Phoenix and Douglas.

The award recognizes Janes as an entrepreneur, managing seven schools in five cities, maintaining three charters amid a high failure rate for charter schools in the state, and mentoring staff for consistent culture and quality amid fast expansion.

An active advocate for Arizona education for more than a decade, Janes’ schools balance an academic foundation with programs such as sports, arts and music that are increasingly affected by public school budget cuts. The character-based curriculum ensures that students at Janes’ schools learn the importance of character traits such as trustworthiness, respect, responsibility, fairness, caring, and citizenship. Proactive, long-term bullying prevention programs were introduced in some of the schools this year.

Each of Janes’ charter schools also incorporates community service.  An active member in several non-profit community organizations, such as Angel Charity for Children, Junior League of Tucson, the National Association for the Education of Young Children, Habitat for Humanity, Red Cross and the Advisory Council for the Arizona Charter School Association, Janes is a strong believer in bringing community service projects to Arizona’s youths.