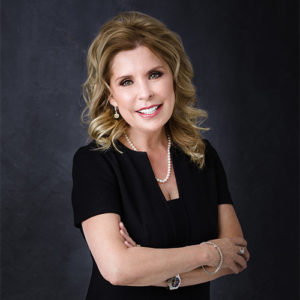 Candace Hunter Wiest is the founder and CEO of West Valley National Bank. The bank opened its doors on December 23, 2006, and survived the Great Recession while many others in Arizona did not. The bank serves small businesses, professionals, physicians and dentists, with branches in Goodyear, Gila Bend, Las Vegas and Phoenix.

Wiest’s career path has been unconventional. She married at 17, had three children by age 21 and, when the youngest child was a few weeks old, became the family’s sole provider. After spending time in the hospitality and insurance industries, she joined her first bank in 1986 as a loan clerk. In June of 2019, Wiest celebrated her 26th anniversary as a bank CEO and her 33rd anniversary as a banker. Formerly, Wiest was the president of Inland Empire National Bank in Riverside, California. Wiest became the seventh president in the bank’s nine-year history during the recession in 1993. After accomplishing a significant turn-around in 12 months, the bank continued to be a high-performance community bank for the remainder of her tenure.

In her career, she has experienced many firsts. In addition to being the first CEO of her bank, Wiest in 2003 was elected by community bankers in the Western District of the San Francisco Federal Reserve to become the first women to serve as a Class A Director in the bank’s 100-year history. She was re-elected for a second term in 2006. Her term spanned both the Greenspan and Bernanke administrations. While at the SFFRB, Wiest served as the chair of the Public Affairs Committee, a member of the Audit Committee, and was one of four directors appointed to the Search Committee that chose Janet Yellen as the CEO of the SFFRB. Wiest was also the first female chairman of the California Independent Bankers.

Wiest believes that community commitment is the cornerstone of community banking. Currently, she serves as the chairman of the board for Delta Dental. She has also served as a director and secretary of CTCA at the Western Regional Medical Center, a director for the Greater Phoenix Leadership, a director of the United Way of the Valley of the Sun, a member of the board of the Interstate 11 Coalition and a mentor for UCR Business School. Additionally, she was appointed in 2011 by Governor Brewer to serve a three-year term as a board member of the Arizona Commerce Authority.

Recent public recognition includes being named as one of 100 Women to Watch nationally by Biz Women, a publication of the national Biz Journal; a 2017 Trendsetter by Trends Charities and Trends publications; Forbes Women Leaders of the West; earned a commendation from Congressman Paul Gosar for economic development efforts and job creation; and a 2016 Outstanding Woman in Business from the Phoenix Business Journal. Past recognition includes being named as one of the 50 Most Influential Women in Arizona by AZ Business Magazine, recipient of WESTMARC Leadership Award and Athena award, named as one of the Most Admired CEOs by the Phoenix Business Journal, named as the West Valley Woman of the Year, and was awarded the Stevie Award recipient for Best Executive.