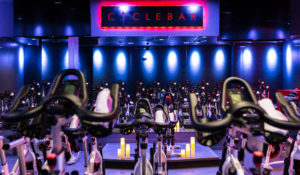 “Boutique studio fitness is a growing segment of the fitness market,” say Julian and Karen Loveday, owners of the new CycleBar studio in Gilbert and licenses to build two more in the Gilbert and Tempe territory.

Another national concept has now opened its first location in Arizona, with franchisee Kim Gavin bringing Row House to Scottsdale’s Hilton Village Shopping Center. Originally created in NYC, the high-energy and low impact fitness concept modeled after the team sport is quickly sweeping the nation as it reaches cult status. Row House is Arizona’s first gym dedicated entirely to indoor rowing and the first of three locations planned for the Valley. Says Gavin, “Being born and mostly raised in the Valley of Sun, I am intimately familiar with its health-and-wellness mindfulness. Given the exposure of rowing not only on Tempe Town Lake but the bursts in a variety of gyms and studios in their routines, it was the perfect time to bring this concept to town.” 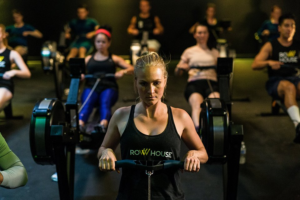 Indoor cycling is one line of fitness that has been around and been a successful business proposition for decades. The Lovedays describe CycleBar as taking it to a new level with state-of-the art studios, bikes and audio-visual equipment. “The idea has been built upon the old ‘spin’ methodology with rhythm, musicality and, most of all, fun becoming the key ingredients for people getting fit.” Noting there is also an element of safety, with cycling being low impact and indoor cycling being safe from the standpoint of traffic, accidents, flat tires and the elements of nature, the Lovedays point out a particularly positive potential plus for the business here in that “Southern Arizona is somewhat unique with the summer climate limiting the hours that one can participate in cardio-based activities outside.”

CycleBar and Row House are part of the group of fitness concepts under the California-based Xponential Fitness umbrella that includes Club Pilates, StretchBar and Yoga Six, which recently announced its first Valley location in Scottsdale.