You are here: Home / In Business / Bob Meyer’s Vision Revitalized Phoenix Children’s Hospital
In Business  |  From the Top  |  October 2011 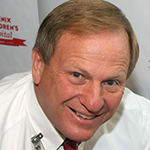 Some business consultants, faced with the challenge of trying to save a children’s hospital that is $48 million in debt and with barely any cash on hand, would have suggested declaring bankruptcy or selling. Not Bob Meyer.

Thanks to his visionary approach, in the eight years Meyer has been with Phoenix Children’s Hospital — starting out as interim chief executive officer in May 2003 before being appointed president and chief executive officer in October of the same year — the hospital has gone from being in the depths of financial disaster to being financially solvent as well as expanding to become one of the largest and highly acclaimed pediatric hospitals in the country.

Meyer first became involved with Phoenix Children’s Hospital in 2002, when he was vice president and national director for Health Strategy Practice for Cap Gemini, LLC, formerly Ernst & Young, LLP. The Irvine, California-based consulting firm was hired to assess the financial situation of the hospital and determine if it could regain financial viability. Says Meyer, “At the time, the hospital’s bonds were in default and there was only seven to 10 days’ worth of cash on hand. Things were pretty grim.” His study of the budget uncovered two issues. “The first problem was with the revenue cycle with billing and collecting, and the second was with its expensive nursing delivery model.”

Despite these tangible financial issues, Meyer was able to look beyond the problems and see the potential. The hospital, he was pleased to note, had tremendous support from physicians and its board.

“I was asked if, by January of 2003, the facility could be turned around, and my answer was yes,” he says. “Then the second question was, ‘If yes, what is the probability of success?’ and I said, “About 90 percent.’”

Getting busy with what he called the “turnaround option,” Meyer worked to revamp the issues he saw as the biggest obstacles to financial solvency. Within a year, Phoenix Children’s Hospital went from being $48 million in the red to about $3 million in the black. “It was just over a $50 million turnaround in one year,” he says. The hospital’s board, impressed with Meyer’s financial strategies and successes, asked him to stay.

But for Meyer, there was more to accomplish beyond the financial turnaround. He wanted to take Phoenix Children’s Hospital and expand it both physically and in terms of its number of employees. “I saw it as a challenge. We were the fifth-largest city and the fourth-largest pediatric market, so we should have a world-class hospital,” he says. “I took the job, and started planning for the future.

“What was a big ‘aha’ moment for me was the tremendous growth of the Valley. We had about 980,000 children in the area when I was hired, and we have about 1.1 million children now, and we are projected to have 1.7 or 1.8 million by 2025.” The projections revealed that an additional 800 hospital beds and 200 physicians would be needed to serve the needs of the area’s future number of children. “Clearly, we needed to grow in order to meet the needs of the facility,” says Meyer. “We needed more beds, but we also needed a modern physical plant. We deal with kids who are very ill, so we need a very high-tech facility, with the most recent versions of MRIs and other equipment.”

A proposal to expand the hospital went before the board, and, much to Meyer’s pleasure, it voted to move forward with the expansion. The $538-million project, announced in 2006, was completed this past June with the grand opening of a new 11-story patient tower. Meyer’s visionary goals for what the hospital was capable of have paid off and Phoenix Children’s Hospital is now ranked as the third largest children’s hospital in the country.

“But to be truly world-class,” says Meyer, “we needed to look at consolidating our services with St. Joseph’s Hospital and Medical Center.” He went to work figuring out how the two hospitals could combine forces — and the strategic alliance between the two hospitals was completed on the same day the new patient tower opened. “In our ultimate goal of being nationally recognized, St. Joe’s is a major piece of that puzzle,” Meyer explains. “Individually, we had medium-sized programs and everyone was happy, but with one common vision of what we wanted to get to, it’s worked out and has been beautiful and tremendous.”