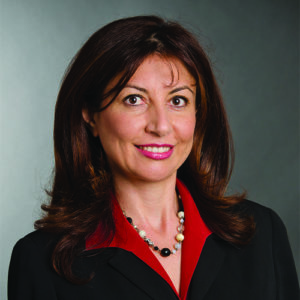 Born in Iran to Baha’i parents, Bahar Schippel witnessed the horrors of the Iranian revolution. The most difficult phase of Bahar’s life occurred in 1979 when the Ayatollah’s regime began a process of religious cleansing of non-Muslims, which included her family. Her parents lost their jobs and her family’s assets were frozen. Later, the revolutionary guards attempted to detain her parents for questioning. Knowing that many who were taken for questioning never returned, her family went into hiding. To protect their daughter, they quietly arranged to send her to an international boarding school in India. Entering at only nine years of age, she lived at the school for the next seven years, with little family contact. In 1986, Schippel’s family escaped Iran and was welcomed into the United States as refugees, where they began a new life.

Today, Schippel is a partner at Snell & Wilmer and a member of the firm’s expanded executive committee. She is a Certified Tax Law Specialist and chairs the firm’s tax practice and its attorney development committee. She is a business tax lawyer who specializes in tax planning for mergers and acquisitions, joint ventures, and real estate transactions; drafting LLC and partnership agreements; tax planning for fund formation and operations; structuring tax-efficient debt workouts; designing equity compensation for LLCs and partnerships; and representing taxpayers before the IRS.

Schippel has a long history of service in professional and community organizations. She has served on the Council of the ABA Tax Section for many years, including most recently as a vice chair of the Section, where she spearheaded the Section’s pro bono activities. She is also a past chair of the ABA Tax Section Committee on partnerships and a past chair of both the Tax Law Executive Council and the Tax Law Advisory Commission of the State Bar of Arizona. She is currently a regent of the American College of Tax Counsel; and a member of the planning committee for the University of Chicago Tax Institute, the Bloomberg BNA Real Estate Advisory Board, and the Wolters Kluwer Legal Tax Advisory Board. Schippel frequently speaks at national and regional tax conferences and contributes articles to top-tier tax publications.

Throughout her career, Schippel has been recognized for her professional accomplishments, which include the Gold ‘n Gavel Star, ASU Sandra Day O’Connor College of Law (2017); Outstanding Alumna: Sandra Day O’Connor College of Law (2011); John S. Nolan Fellow, ABA Section of Taxation (2006-2007); The Best Lawyers in America®, Tax Law (2010-2020); and Southwest Super Lawyers®, Tax (2010-2011, 2013-2014). With respect to community involvement, Schippel serves on the board of directors for the Friends of Public Radio Arizona. She formerly served on the Arizona Foundation for Women Board of Directors, the Arizona Opera Board of Trustees, and the Arizona Foundation for the Eye Board of Governors.

Schippel earned her LL.M. from the University of San Diego School of Law, her J.D. from the Sandra Day O’Connor College of Law at ASU, and her B.S. from ASU.