You are here: Home / In Business / Architecture: Building Our Business Environment
In Business  |  Feature  |  May 2014 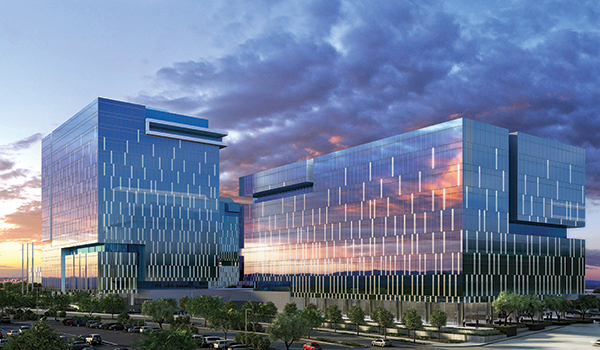 An old motorcycle dealership that is now a vibrant coffee and wine bar. An old abandoned produce warehouse transformed into a stylish and modern office building. A multi-story, multi-use contemporary building complex in the heart of a thriving waterfront location.

These are just a few of the many architectural projects that not only provide places for people to work, eat, shop and congregate, they also help to define the overall business philosophy of the Phoenix metropolitan area as one that values the past while welcoming the future.

Adaptive reuse projects are really starting to take off in popularity, observes Michael Rumpeltin, architectural designer and owner of Brick & West, LLC in Phoenix. Instead of tearing down an old church that is no longer in use, today it is more likely that the building will be transformed into a restaurant or other usable space. “To be able to take old buildings and re-purpose them for reuse is important. They can be updated to make them relevant and useful for our times,” he says. “We, as humans, have a social responsibility in our roots and culture to respect old architecture.”

Rumpeltin, whose firm focuses on adaptive reuse projects as well as hospitality and urban infill mixed-use, grew up on the East Coast, where these types of projects have been common for some time. “My original stomping ground was Manhattan; when you travel to cities older than Phoenix, you find a plethora of old buildings being reused,” he says, adding that adaptive reuse projects are an indicator of how a city is growing, as well as helping renew an interest in what he calls an urban walking environment. “I think the fact that people are returning to the city center and are not wanting to drive an hour to work indicates a shift in the way people want to live their lives.”

Transforming an old school, church or other building into something vibrant and new has its inherent sets of challenges, Rumpeltin notes. It requires a great deal of flexibility as unknown and unseen issues become apparent. They are almost always complex, challenging and demanding, he notes, and they require more thought than ground-up building projects. Expressing his hope that adaptive reuse projects are not just a fad, he says, “They really do help acknowledge the uniqueness of Phoenix.”

Jason Blakley, program manager for the Planning and Development Department in the Office of Customer Advocacy in Phoenix, also speaks to the benefit of adaptive reuse of existing buildings in helping strengthen and reinvigorate existing neighborhoods by providing new dining, retail and service options. And he adds, “Establishing these new uses in existing buildings also helps eliminate blight and supports green building principles by reusing existing materials and reducing waste.”

Three examples of adaptive reuse projects in Phoenix are The Refuge Coffee & Wine at 4727 N. 7th Ave., Desert Song Yoga at 3232 N. 20th St., and Taco Guild at 546 E. Osborn Rd. These projects involved, respectively, transforming a former motorcycle dealership into a coffee and wine bar, turning a former electrician’s union hall and offices into a yoga and massage center, and remodeling classrooms and an existing church building into a restaurant.

For Brian Cassidy, president of CCBG Architects, Inc., working on adaptive reuse projects in the core of downtown Phoenix is a passion. He estimates his firm has worked on 30 or so of these projects over the years — six of which are currently under construction. “If the building has out-lived its use but the structure is still good, I think these types of projects say as a community that we are responsible, and that we acknowledge the contributions that these buildings have made.”

In many cases, Cassidy explains, the older buildings have a lot of charm and are very well made. Although building code issues often come up and many things have to be adapted to modern standards, Cassidy’s strong belief in re-inventing existing buildings makes it all worthwhile.“It’s a real labor of love, but we love doing it. It’s very rewarding work.”

One adaptive reuse project that Cassidy’s firm handled involved transforming an old two-story produce warehouse that once had rail cars pulling up to it into a modern public relations office. While some people look at the old buildings with skepticism, he says, peeling back the layers to see what treasures can be found is very rewarding.

“It is the character of these buildings that is hard to replicate; we no longer use many of the same materials and craftsmanship,” he says, adding that instead of the city just allowing old buildings to sit and rot away, adaptive reuse helps to re-engage people in their own neighborhoods. “These projects are ideal for clients who have courage and want to come downtown and help to make a difference.”

Steve Venker, planning and design services manager for the City of Scottsdale, has seen a lot of reinventing of existing buildings over the last several years. He cites Scottsdale Quarter as a great example of repurposing a location into something new. “The successful relocation of the Dial research facility that had been there opened up the opportunity for Scottsdale Quarter.” These types of projects help to show business owners there is opportunity in Scottsdale, Venker says, adding the city has existing sites for those who want to rehabilitate or reuse buildings as well as the opportunity to construct new buildings.

Each amendment provides flexibility for properties in these two growth areas by allowing development standards that increase allowable height and floor area ratio (FAR), and by creating standardized bonus opportunities relative to development standards in exchange for public benefits that projects would include. Optima Sonoran Village, currently under construction at the southeast corner of Camelback Road and 68th Street, “is one new development project [that] has been approved to use the provisions of the … amendment that is related to the Downtown Area,” Venker says, and gives Impact Church/Sunrise Commons, which has an application for a project in the other area now in the public hearing process for entitlements, as another example of a project going forward on the strength of these zoning ordinance amendments.

New business construction is also underway at Tempe Town Lake. Architectural design firm DAVIS has completed the design portion of the Marina Heights project, a two million-square-foot multi-use office development that will house the new State Farm regional office. Construction will begin in August with a scheduled opening in 2015.

Richard Drinkwater, principal architect and project designer, describes the project as the single largest office development deal in Arizona’s history. It will have five buildings, ranging in size from six to 16 stories and spanning 20 acres along Tempe Town Lake. Retail amenities like coffee shops, restaurants and fitness facilities will be designed “to fit in well with the surrounding buildings and the environment,” he says. Architecturally, Drinkwater notes, the project speaks to the occupant’s corporate aesthetic, which values creativity. He believes the project will send the message of a very vibrant and welcoming business community.