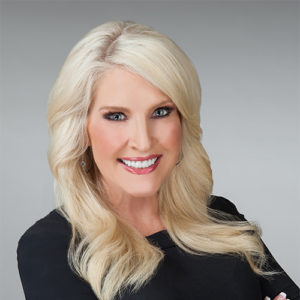 Anita Helt has more than 30 years of experience in broadcasting. She currently serves as the vice president and general manager of ABC15 Arizona, a position she has held for eight years. She is the only woman to lead a major affiliate television station in Phoenix. She came home to the Valley after serving a year as the president and general manager at KXTV-TV, the ABC affiliate in Sacramento. Most of her career has been in Phoenix; she spent 15 years as the vice president of marketing and programming at KPNX-TV, where she was responsible for syndicated and local
programming, creative services, community relations and digital operations for the station.

Helt is considered an impactful leader in her company, E.W. Scripps, and is charged with leading the local media company in its second largest market. Since joining the station eight years ago, she has added 10 hours of local news and programming each week and helped significantly elevate the station’s ratings and position in the market. In the most recent ratings (July 2019, NSI) ABC15 newscasts placed first or second in virtually all key time periods — 4:30 a.m., 5 a.m., 6 a.m., 4 p.m., 5 p.m., 6 p.m., 6:30 p.m., 10 p.m., Sat. 5 a.m., Sat. 6 p.m., Sun. 5 a.m., and Sun. 5 p.m. — a great accomplishment for what was once an emerging station. ABC15.com is also considered a leader in the digital space, with the No. 1 local television website in Arizona.

What sets Helt apart is her commitment to people, the Arizona community and the station’s mission to help make the lives of Arizonans better. Under her leadership, the station has launched several key community initiatives that have raised millions of dollars for Arizona children and families in need. These include the annual telethon to benefit Phoenix Children’s Hospital; Recycle Your Bicycle and Taking Action for Foster Children, which refurbishes bikes and collects donations for children in Arizona’s foster community; ABC15 Salutes Arizona Veteran’s, which honors veterans who continue to serve their communities; and Operation Santa Claus, which collects money, toys, food and clothing for several Valley nonprofits.

Helt has a long history of service to the Arizona community. She currently serves as president of the Arizona Broadcasters Association Board of Directors and chair of the endowment board of Arizona State University’s Walter Cronkite School of Journalism and Mass Communications. She has served on boards and in leadership capacities for several Valley nonprofits, including the Phoenix Children’s Hospital Foundation, Phoenix Assistance League, Fresh Start Women’s Foundation, Susan G. Komen Foundation, National Charity League and Special Olympics Arizona. She was
a member of Valley Leadership Class XX.