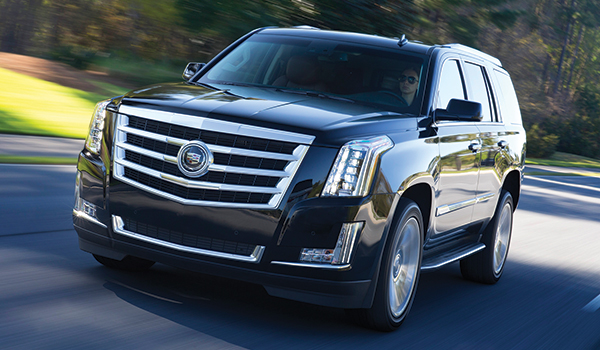 The luxury SUV seems to be a thing of the future and not the past given what GM put into the new Cadillac Escalade — all newly redesigned and a step up from past editions, with real wood interior trim and the new generation mechanics that are making this ultra-premium sports utility vehicle a contender for Range Rover and Infinity.

Tighter steering, more nimble ride and a mild jump in MPG ratings (an estimated 15 city and 21 highway) is giving the carmaker accolades despite its 6.2-liter V8 engine. Still powerful with the 420 horsepower and 460 pound feet of torque, this is one of the most popular SUVs on the road. Despite the roar of its engines, this fourth-generation model is quieter than its predecessors. With inset doors being the biggest engineered redesign element, the Magnetic Ride Control suspension adds balance to the overall performance. It reads the road up to 1,000 times a second as magnetic particles suspended in fluid react to a magnetic field that adjusts the suspension to ever-changing road conditions.

he interior bears the biggest differences and improvements in Cadillac’s newest generation luxury SUV. These include luxury-appointed leather seating with new arrow design, an incorporated v-shaped dash that somehow brings instruments to life with the touch of a button or the swipe of a hand, and electronics that bring this beast to the future of automotive technology. The instruments on the dash are digital with multiple options for viewing gauges, speed and various readings on performance and mechanics. The available Heads-Up Display is a true safety insight, as the speed is displayed along with the posted speed limit. It is reconfigurable to meet the driver’s eyes with the convenience of electronic adjustments on the dash. Many of the features are on the display screen, which simplifies the design of the dashboard and adds an elegant look to the wood- and piano-black-trimmed design.

A smooth ride and quiet and nimble performance are what has made this 2015 Cadillac Escalade a truly award-winning choice for the family or executive.