You are here: Home / In Business / 2013 Valley Leadership Man & Woman of the Year Honorees Announced
In Business  |  Achievements  | 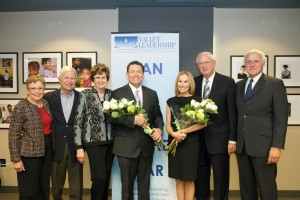 “Gary embodies Valley Leadership’s mission by advocating and modeling the importance of the life cycle of giving,” said Tom Ambrose, co-chair of this year’s Selection Committee. “He is dedicated to helping others achieve greatness by serving and strengthening their community.”

Ziegler is dedicated to serving multiple philanthropic support and nonprofit organizations benefitting education, arts, athletics, Boys and Girls clubs, healthcare and human services. She is a seasoned marketing and communications professional with a career spanning 25 years working with Valley organizations including Phoenix Chamber of Commerce, Jennings & Thompson and Westcor.

She is most known for her leadership with the Fiesta Bowl providing more than 30 years of active volunteerism. In 2006, she led a staff of 28 and 3,000 community volunteers in the execution of three national college Bowl games and 50 statewide events as chairman of the board. Ziegler not only gives her time, but commits resources to many worth causes. She provided the lead gift to raise funds for the Scottsdale Museum of Contemporary Art and for Southwest Autism Research & Resource Center’s Campus for Exceptional Children in Phoenix.

“Ellie’s innate leadership abilities motivate her fellow citizens to give back to their communities,” said Ambassador Barbara Barrett, selection committee co-chair. “Her selfless service to her community is a shining example of what it means to be a Valley Leadership Woman of the Year.”

Trujillo and Ziegler join a prestigious list of past Man & Woman of the Year award recipients. U.S. Sen. Barry Goldwater was honored as the inaugural Man of the Year and, most recently, Tom Ambrose and Ambassador Barbara Barrett were recognized as the 2012 recipients.

The newest inductees will be formally recognized at a luncheon on March 27, 2014, at the Arizona Biltmore. For more information or to purchase seats or sponsorships, call the Valley Leadership office at (602) 952-6760.