Caring When It Hurts 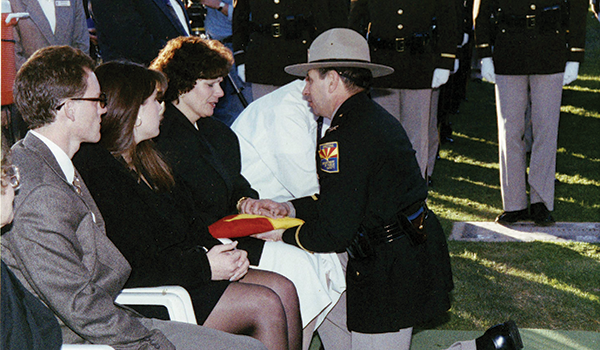 “This year’s Tribute to Heroes will be different,” says 100 Club of Arizona executive director Sharon Knutson-Felix, noting that in 2013 “we lost 22 officers and firefighters in the line of duty.” The Tribute is one of the organization’s two major fundraisers, supporting its efforts to “stand behind the men and women who stand behind the badge.” The event March 7th at the Orpheum Theatre will start with a social hour outside when guests can enjoy heavy hors d’oeuvres prepared by 15 local chefs. Moving inside, the program will start with a flag ceremony honor service. National inspirational speaker Bob Welsh has prepared a special tribute for the occasion, and he will be followed by concert pianist William Joseph performing. Says Knutson-Felix. “People walk away feeling they want to express thanks to those who serve us; those who serve feel appreciated.”

Funds are used to provide a financial contribution to families of public safety employees who have suffered a tragedy. Knutson-Felix, who has personal experience of what this support — “being their first responders” — means to them, has worked to expand the program to cover employees in all areas of public safety throughout the state and respond not just to tragedy but help families suffering “anything life-altering.”