Public-private collaboration has ensured COVID-19 patients and healthcare resources are balanced across the state even during times when Arizona was the No. 1 hotspot in the world

from doctors who worked on the project, listed at the end of this article 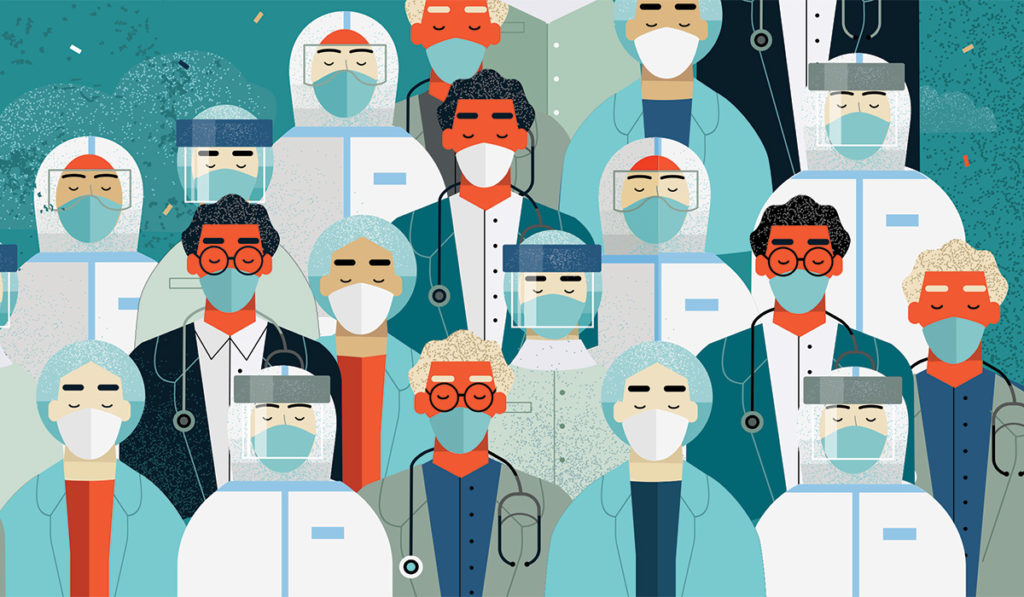 A year ago this month, Central Logic, the industry innovator in enterprise visibility and tools to accelerate access to care, announced a first-in-the-nation statewide agreement with the Arizona Department of Health Services to power a new Regional Access Center, leveraging Central Logic’s technology. The Access Center has been successful in ensuring all the state’s patients known to have, or suspected of having, COVID-19) receive the care they need by locating available hospital beds, providers, equipment and other resources — all through a centralized, integrated technology platform updated in real time. As directed by the state, the Regional Access Center included essentially every public and private hospital and health system in Arizona, including the Indian Health Service hospitals.

The origins of the Surge Line date back to March 2020 as state officials were observing the surge of patients with COVID-19 in New York City and how hospitals were struggling with overcrowded facilities and finding appropriate care for critically ill patients. AZDHS met with the major health systems in the state to discuss a unified, statewide transfer service for patients with COVID-19 to expedite placements and admissions while load-balancing patients and healthcare resources such as medical/surgical beds, intensive care unit beds, ventilators and specialist care.

The health systems met and agreed to proceed with the public-private collaboration, marking an understanding that previous competitors would now be acting as collaborators in order to put patients first. With implementation support and technology solutions from Central Logic, the Surge Line was up and running in less than two weeks. It was not until months later in late June and early July when the state experienced its first major surge of patients with COVID-19, which required the Surge Line to transfer nearly 70 patients per day at its peak.

“The Arizona Department of Health Services and hospitals in Arizona worked together to create this integrated, efficient statewide system to protect patients and hospitals against unbalanced hospital surges,” says Lisa Villarroel, M.D., M.P.H., medical director of Public Health Preparedness at AZDHS and the Surge Line.

Efficiently orchestrating care across the state required a new structural capability for many hospitals and health systems: real-time bed visibility. Historically, referring physicians would need to call other hospitals to determine the availability of beds, specialty physicians and equipment, such as extracorporeal membrane oxygenation machines. The Surge Line agents who coordinated the care had visibility over all those crucial elements through the Central Logic platform powering the system.

“Real-time bed visibility was a new feature that Central Logic was preparing to launch for our clients when the Surge Line began, which meant we had an opportunity to test the capability on its largest scale yet,” says one of the article’s authors, Luke Smith, D.N.P., R.N., N.E.-B.C., C.C.M., director of the Arizona Surge Line and client operations analyst at Central Logic. “Bed Visibility proved to be well up to the task by delivering a clear and reliable overview of capacity for the more than 130 hospitals across the state that are part of the Surge Line. We have since launched Bed Visibility for use by health systems and hospitals everywhere.”

After four months in operation, Surge Line participants were surveyed and asked to rate the system on a 10-point scale. Hospital staff who responded to the survey awarded the Surge Line nearly the highest ratings (between 8.2 and 9.0) on each question, with the highest rating (9.0) for its ability to transfer patients with COVID-19 to higher levels of care.

The Surge Line is maintaining those high levels of satisfaction by continuously improving the service to referring hospitals, including improvements in protocols and data collection and development of analytics to examine out-of-region transfer trends and to refine calculations of time to bed placement.

Eventually, a time will come when the Surge Line will not be necessary to orchestrate the care for patients with COVID-19. The statewide system, however, has numerous applications beyond the pandemic, such as any future hospital surges due to wildfires, terrorism or other public health threats, and is piloting its use for transferring patients with influenza.

“It is our intention to maintain the Surge Line as a public health tool,” Dr. Villarroel says. “The Arizona Surge Line has been a highly successful initiative within the state, delivering a valuable public health resource to reduce avoidable care delays, prevent hospital overcrowding and contribute to improved patient outcomes.”

The full case study on the origin and successful outcomes of the Arizona Surge Line, “Collaboration on the Arizona Surge Line: How Covid-19 Became the Impetus for Public, Private, and Federal Hospitals to Function as One System,” was recently published in renowned healthcare journal NEJM Catalyst. It was authored by physician leaders from AZDHS as well as Arizona hospital and health system leaders from across the state and Central Logic clinicians assigned to the Surge Line, who tell the story of how the Surge Line, which features a 24/7 referral line, has facilitated the rapid placement and equal distribution of thousands of patients with COVID-19 across the state since April 2020.

“It is an honor to have played an active role in a project that has helped so many people in the state of Arizona get the care they need by working with public health leaders to orchestrate the transfer of more than 6,000 patients with COVID-19,” says Darin Vercillo, M.D., chief medical officer and co-founder of Central Logic. “This kind of collaboration was our vision when we founded Central Logic over a decade ago, and it is tremendously humbling and gratifying to see it come to fruition during the pandemic we have been experiencing since early last year.”

The case study was written by those who worked on or in the project:

This article is part of the cover story section, which includes the main story:

The Ongoing Role of COVID-19 Testing