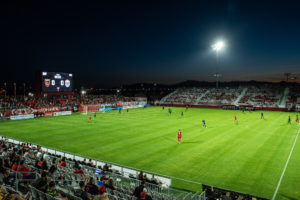 Members of the Willmeng Construction team were special guests at the opening match of the 2021 Phoenix Rising FC season on Friday, April 30. The Willmeng Team wrapped up construction on Rising’s exceptional new stadium and training facility, and the team christened its new home with a 4-1 win over the San Diego Loyal Soccer Club. The new facility is located on the Gila River Indian Community just south of Phoenix and is part of the Wild Horse Pass sports and entertainment development that is growing near the Wild Horse Pass Casino.

“Willmeng is truly grateful to be a part of this winning team,” said Willmeng CEO James Murphy. “It is even more rewarding to contribute to this wonderful facility that will serve the surrounding communities for years to come.”

The team, led by Willmeng as the general contractor, began work on the facility in September of 2020 and that work was on display for all to see on Friday. The complex is complete with two full practice fields, as well as a field that the fans can enjoy as green space before and after the match. The stadium features nearly 10,000 seats, almost double the amount available at the club’s old facility in Tempe. There are now permanent locker room facilities for the teams and the club’s front office was also built on site.

Willmeng was just one part of the team that the Phoenix Rising FC had working on this project. The Gila River Indian Community, Sunbelt Holdings, Wild Horse Pass Development Authority and trade partners Rummel Construction, Inc., SiteWorks, Hawkeye Electric, Degan Construction, LLC. and EPS Group, Inc. all had a critical role in bringing this complex to life.

“This project came together very quickly and to be a part of the final outcome in the form of Phoenix Rising’s Opening Night was very special,” said Willmeng’s Pre-construction Director David Laughlin, who attended the opening match. “Throughout the night, I often reflected on how well each party performed under unique circumstances and became great partners. Opening night was a very rewarding and proud moment for everyone involved!”

The team had enjoyed a great amount of success in its former facility and was hoping that the new one, while much better in function and appearance, would provide that same home field advantage. Based on Friday’s results, which were played in front of a 50 percent capacity stadium of 5,000 fans, the new complex provides that same atmosphere.

Rising head coach Eric Schantz remarked about the atmosphere and the added volume from the fans, despite the stadium only being at half capacity.

“I thinking rounding out the north end and closing in the corners makes it a little bit louder,” Schantz said. “5,000 sure did sound like a lot more when we scored. It felt like the old stadium, a little bit, I felt that vibe. The red smoke when we scored goals was in the air and when I got that feeling, I was like, ‘Ok, we’re home.’ ”

Another new feature of the stadium that Schantz and the team liked was the tunnel that leads from the locker facilities onto the field. He felt that the tunnel, “Really gives you the full, proper stadium environment. As a player, it’s pretty awesome.”

The fan experience at the game was also improved, the most notable upgrade being permanent restroom facilities. Fans were also able to take in the new, large videoboard on the southern end of the stadium and improved concessions and gathering areas that are designed to be more family friendly. The common areas at the stadium are much larger than they were in the former facility, making getting around easier.

The team also put in sideline field-level seating, as well as improved VIP suites, which are now located along the east sideline, instead of on one end of the field. The new facility will also provide improved traffic flow into and out of the parking lot for fans, with access roads running north to the Loop 202 and east or south to I-10.

Willmeng Construction, established in 1977, is a Phoenix-based commercial general contractor specializing in ground-up and tenant improvement projects for the public and private market sectors in Arizona. Willmeng stays true to building excellence and was awarded the Best of NAIOP Arizona’s General Contractor of the Year and TI Contractor of the Year in 2019. They were also recently selected as the 2020 RED Awards General Contractor of the Year. Willmeng is built on great relationships, a commitment to building a genuine place of purpose, and the reputation of positively impacting employees, clients and the community through volunteerism.