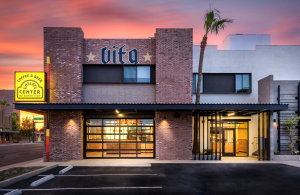 Easley’s Fun Shop, which closed in 2018 after 72 years of selling and renting costumes, was known for its trademark bright yellow building at the corner of McDowell Road and 7th Avenue. When Caffe Vita saw the historic Phoenix building laying dormant, its passion for adaptive reuse real estate and coffee intertwined into its next big idea—the first Caffe Vita location in Phoenix.

Caffe Vita will pay homage to this piece of Arizona history by preserving select interior facets of the shop and with outdoor signage in Easley’s signature bright yellow that says “Our business is fun.” Local brewery Roses by the Stairs and men’s clothier Cave and Post join Caffe Vita to fill out the former Easley’s space.

“It was important for us to give a nod to the beloved business that once called this space home, and we worked with Carol Easley and family to preserve as much of the building as possible while constructing a space that’s uniquely Caffe Vita,” said Deming Maclise, Owner and CEO of Caffe Vita. “We think Phoenix residents will be pleasantly surprised at how much this space feels like an evolution of the location, rather than a takeover.”

Caffe Vita intends to settle into its Arizona home quickly, not only in its historic space but on its menu. In addition to signature items such as Caffe Del Sol Espresso, Single origin coffees and Oatdos (a cortado with oat milk), Caffe Vita will also offer seasonal drinks exclusive to the Phoenix location, such as the Cold Brew Shandy (Cold brew, lemonade, honey, butterfly pea powder) and Prickly Pear Tonic (Espresso, tonic water, lime and prickly pear.) Caffe Vita Phoenix will also have a selection of slushy drinks to cool down on those hot Arizona days.

Spearheading the cafe’s menu will be Sam Spillman, Caffe Vita’s Director of Coffee and the 2019 United States Barista Champion. Spillman’s expertise ensures Caffe Vita is on the cutting edge of coffee education while making its coffee approachable to everyone.

“Sam has an ability to meet people where they’re at, and approach coffee education with a wealth of kindness for everyone, from someone who has never brewed a cup of coffee to the world’s top coffee experts,” said Kate Van Petten, Marketing Director at Caffe Vita. “Sam represents Caffe Vita’s ability to serve the best possible cup of coffee without judgment.”

Caffe Vita will roast its beans on site in a vintage Probat UG 22, the last of its kind made in U.S. history.

Also dotting the menu will be a selection of locally-baked pastries from La Grande Orange Bake Shop, Yo Donut, Suss Pastries and breakfast specialties such as Pricky Pear Fruit Pocket and Vegan and Gluten Free Passion Fruit Donuts.

Caffe Vita will mark its grand opening with a Latte Art Throwdown hosted by Spillman with a cash prize and additional prizes from Minor Figures, La Marzocco, Rishi Tea, Barista Magazine and Slow Pour Supply. As part of the celebration, there will be live music from Recordbar Radio’s DJ J-ME LEE. Caffe Vita hopes to program regular DJ sets and live shows in collaboration with local artists and radio stations.