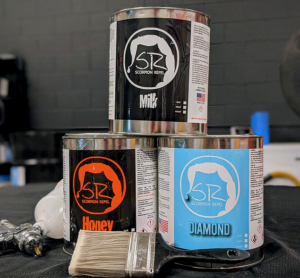 Scorpion Repel is a revolutionary way to prevent Bark Scorpions from entering any home. The product is applied as a clear coat to a home’s exterior that stops scorpions from being able to climb and then enter the home. Scorpions are known as skilled climbers, and stopping their ability to climb the surface of a home makes entry impossible. The product also deters other insects from entering homes.

The biggest challenge in starting and growing the company has been showing consumers how different Scorpion Repel is from the competition, says co-owner Tony Gonzales, explaining that traditional pest control methods offer only two options: seal the home, which is expensive and often ineffective, or spray pesticides around the home, which is also ineffective against the scorpion’s tough exoskeleton. What Scorpion Repel offers is a true physical barrier that’s cost-effective, pesticide-free and guaranteed to work.

“We are so confident in the product that we have what we call the ‹scorpion challenge,’ where we’ll demonstrate its effectiveness for people by having one of our team members stand on a cinder block coated in Scorpion Repel inside a pool or other structure filled with scorpions. We are the only proven way to keep scorpions out of homes,” says Gonzales, who shares that the product is personal for himself and co-owner Aaron Gonzales.

“Aaron began developing the product after paying pest control professionals thousands of dollars to rid his home of a scorpion infestation, only to have them back in his house months later. Aaron and his family where so frustrated with the situation that he and his wife considered selling their home. I joined the company after my young son was stung three times by a scorpion — he had a horrible reaction to the scorpion venom and nearly died.”

The two childhood friends decided to partner up to help each other’s families deal with scorpions. They started initial development of the Scorpion Repel System and Coatings in 2013 and began offering the product to the public in 2018.