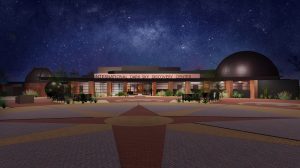 The conceptual design, including a 3D flyover of the multi-functional, 22,000 square-foot International Dark Sky Discovery Center (IDSDC), has been completed by Swaback, an award-winning Scottsdale-based architectural firm.

The builder recently chosen is McCarthy Building Companies, which has experience with complex building projects, such as the OdySea Aquarium and the ASU Biodesign Institute. They are working closely with Swaback to develop the detailed design and estimate that the project will by shovel-ready by November.

“We are very excited to have reached this phase and have an amazing 3D flyover of the facility,” said Joe Bill, IDSDC President. “This brings us much closer to creating an international centerpiece that will inspire future scientists and people of all ages to understand how important dark skies are for the well-being of humans, plants, and animals and for opening the window to the observable universe.”

Chosen to design the exhibits is PGAV Destinations, a St. Louis firm that has designed exhibits for major facilities, such as the Kennedy Space Center and the Smithsonian Air and Space Museum.

Key Arizona leaders support the education and research goals of the IDSDC. Those statements of support from leaders such as Senators Kelly and Sinema, Governor Ducey, ASU President Michael Crow, and more are listed on the home page of the IDSDC website at darkskycenter.org.

“Donations and pledges are bringing this project to life,” said Bill. “We very recently added a new pledge program and already a private individual pledged $1 million.  Also, naming rights opportunities are still available for those who wish to play a major role.”  Bill adds, “The future is ours to create, and the next generation is ours to inspire, so let’s do this.”

The 3D flyover of the IDSDC is available on the website.