Treating the status quo as just a baseline for disruptive improvement 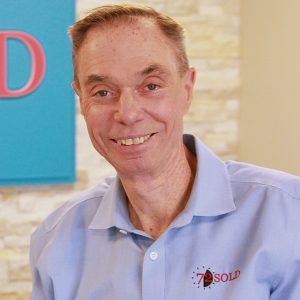 There’s a popular scene from the 1999 blockbuster hit movie The Matrix in which Keanu Reeves (Neo) interacts with a child who appears to bend a spoon with his mind. As he hands the spoon to Reeves, the young boy says, “Do not try to bend the spoon. That’s impossible. Instead, only try to realize the truth … There is no spoon.”

I see business that way. You can’t look at “the spoon,” which is the way an industry operates, as anything other than a baseline. It’s the spoon you are about to bend. The unbent spoon is merely the baseline for change.

When I first got into real estate, I worked for my dad in Cincinnati. As a new agent, I found it difficult (actually impossible) to convince home sellers to sell with me when they could choose from among many highly experienced, well-known competitors.

So, I devised a program that sellers couldn’t say no to. I called it “Make Every Agent Your Listing Agent.” Typically, when you list a home, if the commission is 6%, your listing agent splits it with the agent who represents the buyer. I told sellers I would pay the entire 6% to any agent who procured the buyer.

The only question sellers ever asked me was, “What’s in it for you?” My answer was that I might earn the full 6% if I found a buyer. If I didn’t, “you” (the sellers) would hopefully be thrilled with me for making your home so salable. Therefore you’d probably buy a home through me (where I’d earn 3%) and refer your friends to me for years to come. Every seller I met with said, “Of course we would do all that.”

My business skyrocketed, until my dad (for whom I worked) called me into the office and shut it down. Why? Not because it was a bad program, but because the other agents in his firm complained to him (vociferously) that “The boss’s son has gone rogue” and “He’s taking all the listings away from us unfairly with a gimmick.” Dad told me he couldn’t afford to lose all his sales agents because of me … even though the program was pretty darn smart.

That program was my epiphany in real estate and business. Look at how the other guy is doing business and “invent” a product, process or strategy that “blows your competitors away” because your customers can’t say no to it.

I’ve done this often over the years, mostly in real estate. And that’s the foundation for 72SOLD.

Sellers hate daily showings, so we eliminated them. Sellers hate to decide on offers day after day before every possible buyer has had a chance to make an offer, so we arranged for sellers to see offers from every possible buyer all at the same time. Sellers also often don’t want to move right away when they close, so we arranged for them to stay up to six months. And of paramount importance, sellers want to know they are getting absolute top dollar, over market value for their home, so we developed a competitive auction-like-process that (according to a one-year independent study) resulted in an average of 8.4% higher prices for our sellers.

We started with a clean slate and reinvented the way homes are sold. Like I learned in my early days in real estate, it’s not about “me” or how “good” I am. It’s about “you” and what I can do for you, which always, always, has to be about a new, differentiating, better way that’s intuitively better. Most of the time when we meet home sellers and they learn about our program, they ask, “Why isn’t everyone doing it?” That’s when we know we’re on the right track.

Back when my dad made me shut down my first disruptive real estate program (because of objections from his agents), I learned that if you expect to effect change, you’d better be able to take flak from those you force to change. But it’s okay when you realize you’re doing good for consumers and, ultimately, your competitors will be doing it, too.

My obsession is positive, consumer-based disruption. Amazon did it. Uber did it. Carvana is doing it. Those firms disrupt industries for the benefit of consumers — those who are served by that industry. That’s what I hope to be my legacy.

While others in my industry may use spoons, I bend the damned things.

Stats and Facts about 72SOLD

Did You Know: 72SOLD founder Greg Hague was attacked by a bear, crashed his motorcycle in Africa, was a drummer in a popular rock band, and force-landed his private plane on a remote island in the Atlantic where he was stranded for several days. Hague also received the No. 1 score on the Arizona Bar Exam at 60 years old after being out of law school for more than 35 years.