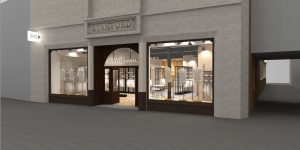 Amsterdam-based lifestyle and fashion brand Scotch & Soda announces today that it will open a total of 20 new brick-and-mortar stores globally over the next 6 months and includes a location at Scottsdale Fashion Square in Scottsdale.

Highlights of the retail network acceleration include the upcoming launch of two Scotch & Soda flagship stores in Milan and London, its largest European stores outside of The Netherlands. New directly operated and franchise shops will also open in key cities such as Washington D.C., and Boston, marking the 50th store opening in North America, as well as in Frankfurt, Dubai, Doha, Tel Aviv, Johannesburg, Cairo, Shanghai and Beijing. It follows the recent opening of 16 stores globally in the last 6 months.

Additionally, Scotch & Soda will continue to roll out its rebranding strategy this year, with the refit of existing stores under its vibrant “Free Spirit” new design concept in cities such as Amsterdam, Paris, Lyon, Madrid, Barcelona and Luxemburg City.

“The growth momentum we saw last year continues to strengthen, with more locations launching globally. We are looking forward to the opening of our flagship stores in Milan and London, in two of the world’s most attractive fashion retail destinations. It is a great opportunity to reach new customers worldwide, and to introduce them to our brand, inspired by the free spirit of Amsterdam“, comments Frederick Lukoff, CEO.

In the United States, Scotch & Soda opened in February a new store in Scottsdale, Arizona, located in the upscale Fashion Square shopping complex. Last week, the brand opened a location in Boston’s Seaport neighbourhood, also known as the Innovation District. Additionally, a Scotch & Soda store will open in May in the Union Market area of Washington, D.C., whilst a new location will be launched mid-June in the Sommerset Collection shopping mall in Detroit. The brand will also open a location in the La Cantera mall in San Antonio in July.

This follows the October opening of a location in the King of Prussia shopping mall in Philadelphia, Pennsylvania, the brand’s second store in the city. In the same month, Scotch & Soda opened its first location in Charlotte, North Carolina, located in the SouthPark Mall. By the end of September this year, the brand’s store count in the North America will reach 50 locations, including 46 in the United States and four in Canada.

The acceleration of Scotch & Soda’s retail network will also include new openings in Europe. Following the opening of a new showroom in Milan last year, Scotch & Soda will open a flagship store in Via Alessandro Manzoni, one of Milan’s most prominent fashion destinations. Slated to open in early June, the store will have a sales area of 186 square metres.

Scotch & Soda expands its presence in the United Kingdom, with the launch of its third brick-and-mortar address in London this summer. The 250-square-metre flagship store will be located in Long Acre,  one of the busiest streets in Covent Garden, an area renowned for its luxury fashion and beauty stores as well as award-winning restaurants and theatres.

In France, Scotch & Soda opened a franchise store in the Southeastern city of Sainte-Maxime last month. Additionally, the brand will open two new directly operated stores in the northern cities of Rennes and Rouen mid-May, whilst a store will open in Besançon in August. This follows the openings of Scotch & Soda stores in key cities last year, with new locations in Nice at the Cap3000 mall in July and in Levallois-Perret on the outskirts of Paris in September. In December, Scotch & Soda opened a 127-square-metre in the Saint Germain neighbourhood of Paris, the brand’s first location on the Left Bank and the fifth directly operated store in the French capital. As of September this year, Scotch & Soda will have a portfolio to 31 stores in France.

Scotch & Soda continues to expand its retail presence in Germany, with the openings of new locations in Frankfurt in February and in Cologne last month. Upcoming openings include a new location in Augsburg in June. This follows the opening last year of the brand’s first franchise store in the country (in Sindelfingen, near the city of Stuttgart), as well as new directly operated stores in Dortmund, Hamburg and Berlin, bringing the brand’s store count in the country to 42 by the end of September 2022.

Additionally, Scotch & Soda will open a new store in the Emporia shopping centre in the Swedish city of Malmö this coming June, adding to the brand’s retail network in Scandinavia.

Scotch & Soda will continue to expand its presence in China with the opening of its first Beijing store this month, in the Taikoo Li Sanlitun shopping centre. The brand will also launch two new locations in Shanghai, with store openings in the Taikoo Li Qiantan shopping centre by the end of  April, and in the Shanghai Réel mall in August, bringing Scotch & Soda’s store count in China to five locations.

These openings follow the launch of Scotch & Soda’s first digital store on Tmall in China in fall 2021, the first commercial initiative since the brand started operating directly in the country last year. The upcoming brick-and-mortar locations will be an addition to the recent store openings in the Heartland 66 shopping centre in Wuhan in December, and the launch in January of the brand’s first flagship store in Shanghai’s Xintiandi district.

Scotch & Soda pursues its expansion in the Middle East with the recent opening of its ninth store in Saudi Arabia, located in the Riyadh Park Mall. This follows the opening of a store in Dammam’s Nakheel Mall in December of last year.

In the United Arab Emirates, Scotch & Soda opened a store in the Dubai Hills Mall in February, whilst another location is slated to open in the Marina Mall in early May, for a total of five locations in the country. Scotch & Soda will also open its second address in Qatar in April, with a new store in the Place Vendôme shopping centre in Lusail, near Doha.

In Africa, the brand will open in July a new store in the Sandton City mall in Cape Town, South Africa, whilst a new location will open this coming August in the Festival City mall in Cairo, Egypt.

The interiors of the new brick-and-mortar locations will carry Scotch & Soda’s “Free Spirit” store design concept launched last year. Inspired by the power of self-expression and the free spirit of Amsterdam, the city where the brand was born, the concept combines warm colours and sleek design elements to connect the expected with the unexpected, and includes sustainable features such as LED lighting, FSC-certified wood herringbone flooring and new hangers made of recycled materials.

The façades will carry the new brand logo revealed in March of last year, which embraces the symbol of unity at the heart of Scotch & Soda’s name, the ampersand, which follows the delicate movement of a thread attached to the eye of a needle, nodding to the craftsmanship that goes into the brand’s collections.

The acceleration of Scotch & Soda’s global retail network will be combined with the brand’s omnichannel and unified commerce ambition, to be completed in the Fall of 2022. This follows the integration of RFID technology in partnership with Nedap for stock level optimization, as well as the opening in September of this year of a new 27,500-square-metre warehouse in Hoofddorp, in the outskirts of Amsterdam. The new warehouse will include a roof entirely fitted with solar panels and automatically irrigated vertical gardens.

Born in Amsterdam in 1985, Scotch & Soda celebrates the free spirit of its birth city. Endlessly optimistic, the brand champions individuality, authenticity and the power of self-expression to create the unique – an attitude reflected in its designs. The Scotch & Soda collections include menswear, womenswear, kidswear, denim, eyewear, fragrances and accessories, occupying a unique space in today’s global fashion landscape.

Collections can currently be found in 253 freestanding stores across Europe, North America, Asia, the Middle East, Africa and Australia, as well as in 7,000 doors in some of the world’s biggest cities, including New York, London and Paris. The brand’s online operations also ship to over 70 countries.