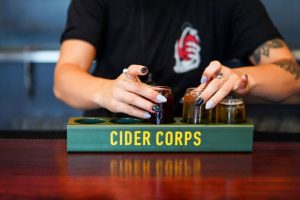 Cider Corps is officially joining the Gilbert food and dining scene on Friday when it cuts the ribbon on its second taproom and new production facility. Gilbert Mayor Brigette Peterson will join Cider Corps co-owners and brothers Josh & Jason Duren on Friday, July 29 at 3:30 p.m. in welcoming the veteran-owned craft cidery to the town.

The Gilbert taproom has 31 taps pouring Cider Corps’ ciders. There are also two cider slushies and canned four packs for take away. Food service is provided by the Brightside Burgers food truck, created and operated by Chef Adam Allison. Guests can also bring other food into the taproom.

Like its first taproom in Mesa, the décor has nods to Jason Duren’s military background and how the brothers got into the cider business. Lighting is made from military helmets worn by Duren and others, and a mural by artist Jason Begay transforms a Purple Heart medal into a blooming Purple Heart flower.

“Our taprooms are where our Cider Corps mission to “Drink Great Cider. Honor Great Sacrifice.” really come to life,” said co-owner Josh Duren. “They are spaces where you can sit side-by-side with people from all generations and backgrounds, enjoy a craft beverage and hear and understand each other’s experiences. We’re really looking forward to being a part of the Gilbert community in this way.”

The taproom is just one part of plans Cider Corps has for the property. In addition to the production facility, the Durens plan to landscape the backlot for additional seating and events. When the time is right, the Durens also plan to open the cidery to tours to help people learn more about cider making and the variety of cider flavor profiles.

“Part of what attracted us to the space is the blank slate it gives to evolve and grow as our business grows,” said Jason Duren. “We get a ton of people from the East Valley, Gilbert and beyond, who make the trek to the taproom. We’re really excited about being closer for them.”

Brothers Josh and Jason Duren (Sgt.,USMC, Ret.) opened Cider Corps in Mesa in 2017. The two had started making cider as a therapeutic hobby for Jason as he recovered from traumatic brain injuries suffered while serving in Afghanistan. Cider Corps is now Arizona’s largest craft cidery and its flagship styles Sangin Sangria, Mango Foxtrot and P.O.G. can be found at retail locations and on tap throughout the state.

Cider Corps creates a range of craft cider styles that infuse fruits, botanicals and spices with its hard apple cider. As lead cidermaker, Jason Duren has created specialized fermentation techniques to reduce the tartness of the apples for flavors that are smooth and balanced without added sugars or sulfates.