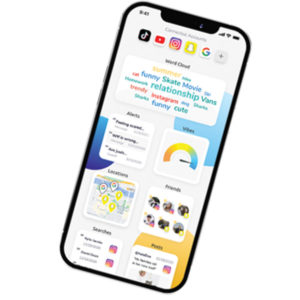 Cyber Dive offers a free web-based app that helps strengthen relationships by allowing parents to easily view their children’s social accounts, understand their online activity and interests and achieve peace of mind — an increasingly relevant service at a time when children are more connected than ever.

This local tech startup aims to eliminate the relevance of parenting styles when using the platform and brings awareness to a child’s mental health in correlation with their online activity. Built by in-house engineers, Cyber Dive gives parents the ability to monitor multiple social media accounts, all on one platform that is easily compatible with all iOS and Android devices.

“We developed this first of its kind online platform because we acknowledge the nuanced challenges we must traverse as parents of digitally connected kids,” says Cyber Dive co-founder and CEO Jeff Gottfurcht. “As parents of 8- to 14-year-olds, we often wonder what kids are doing on the internet, who they’re interacting with and how what they are seeing is impacting how they feel.”

Human trafficking and cyberbullying are also in the founders’ crosshairs. Cyber Dive has partnered with Phoenix Dream Center to collaborate on preventive measures to be taken against cases of human trafficking that are initiated online, and its advanced software enables it to prioritize the issue cyberbullying.

“We’ve seen that nearly 9 out of 10 kids avoid telling their parents about the negative things they see happening online. This leaves parents struggling to keep up, and oblivious to what’s happening beneath the surface,” says Derek Jackson, Cyber Dive co-founder and chief technology officer and former military intelligence officer. “As an intelligence officer, my team’s job was to dig through extensive social media data and provide only the most time-sensitive information to the commander to make life-altering decisions. We took that mindset and made the parents the commander. We show them what’s most important, so they can initiate necessary conversations and directly impact how their child navigates social media.”

Gottfurcht and Jackson set out to get a better grasp on social media for families everywhere, including their own. Gottfurcht was the first person in the world to summit Mt. Everest with Rheumatoid Arthritis and worked on Wall Street for 14 years as a senior vice-president at leading global financial firms. Jackson is an ex-military intelligence officer who previously served as a captain in the U.S. Army, where his intelligence work focused on the social media activity of U.S. adversaries and radical insurgents.

Did You Know: More than 85% of preteens in the U.S. are social media users. According to McAfee’s consumer research department, 87% of young people have seen cyberbullying online but most do nothing about it. Ditch the Label published in its bullying survey that 47% of cyberbullying victims will develop social anxiety, 37% will develop depression and 26% will have suicidal thoughts.