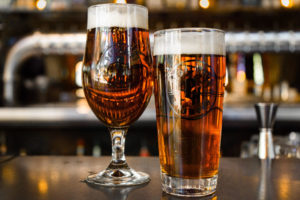 Pedal Haus Brewery is excited to announce the release of its Robert Allen Dollar (RAD) Pumpkin Ale. The craft brew launches this Saturday, October 17 at both the Tempe and Chandler locations. Half of the sales from this beer will go back to the Rob Dollar Foundation, while supplies last. The organization’s mission is to engage with existing park safety initiatives to accelerate the implementation of road safety for the benefit of the cycling community.

“As someone who has spent a lot of time on two wheels and who owns a brewery with a cycling theme we were excited when approached by the Rob Dollar Foundation,” said Julian Wright, CEO of Fork & Dagger Hospitality, which owns Pedal Haus Brewery. “We support our cyclists in the community and what better way to show that than with a collaboration beer that benefits their mission.”

A PSA video was released this week on the Pedal Haus Facebook page in collaboration with the Rob Dollar Foundation that promotes drinking responsibly.

After hearing about the foundation and learning the beer would be released in October, combined with the orange and black foundation colors, Pedal Haus Brewmaster, Derek “Doc” Osborne, was on board to brew a small batch of this delicious ale. Known for its “True to style” beers, this is the first pumpkin beer Pedal Haus has brewed in its five year history.

“We are looking forward to celebrating fall with RAD Pumpkin Ale and spreading the word about road safety at Pedal Haus and during the Rob Dollar Ride,” said John Dollar, Rob Dollar Foundation president. “We thank Pedal Haus for honoring our cause with this brew and emphasizing our message to drink responsibly.”

Members of the foundation will be at the Tempe Pedal Haus location from 3 to 6 p.m. this Saturday, October 17 to talk about their cause and sign people up for the Rob Dollar Memorial (virtual) Ride happening October 25. While there, people can enjoy happy hour pricing from 3 to 6:30 p.m. on the 17th.

Pedal Haus Brewery has been gaining notoriety in the local craft beer scene since 2015 when it opened its location in Tempe (720 S. Mill Ave, #102). Recently, it added a second location in downtown Chandler (95 W. Boston St.). Since then, the popular brewery has won over 32 medals and awards including a gold medal at the Great American Beer Festival in 2018 and Best Brewery in the United States at the 2019 Copa Cerveza de Americas. Owned by Julian Wright of Fork & Dagger Hospitality, Brewmaster Derek Osborne manages the beer lineup at Pedal Haus’ Tempe and Chandler location.

The Rob Dollar Foundation is a Non-Profit 501(c)(3) that was created by family and friends of Rob Dollar, who tragically lost his life on October 29, 2017. While out on a Sunday ride, he was hit and killed by a motorist. Even though the foundation was created by his family and friends, this was a dream Rob shared with his father and few close friends. Following his untimely death, it was only right to create the Rob Dollar Foundation to help the community Rob cared so deeply for.