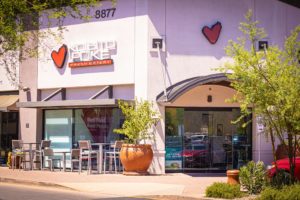 Koibito Poké, an award-winning Arizona-based concept for fresh build-your-own Hawaiian poké bowls, recently opened its newest location in Scottsdale debuting a brand-new design that will be the model for future franchise locations across the country. The healthy fast casual restaurant is actively seeking Franchisees for nationwide expansion after elevating its design and enhancing the customer experience.

Koibito Poké now offers a superior model that focuses on efficiency and simplicity offering the customer an elevated healthy fast casual dining experience. The new restaurant design provides easier kitchen movement, a more open floor plan and large floor to ceiling windows which create a modern and inviting atmosphere for its customers. Guests will enjoy the open visibility of the energized concept with direct views of the menu and line up of fresh ingredients right when they walk in. Both indoor and outdoor seating is available.

Koibito Poké currently has four locations in Arizona and is anticipating expansion over the next 12 months into a dozen new markets by offering a lucrative package to potential Franchisees and area developers that including royalties and benefits. The team already has already secured interest for additional locations throughout Arizona and in states including Texas, Nevada, North Carolina, South Carolina, Illinois, Massachusetts, Connecticut, Washington, Rhode Island, and Florida.

Leading the brand’s nationwide expansion is Koibito Poké’s Co-Founder, Chairman and CEO Todd Stottlemyre, former MLB Pitcher and 3-time World Champion. According to Stottlemyre, the company aims to set itself apart from others by serving healthy food that has great advantages to building the body’s immune system — and by a commitment not to follow the standard but to become it.

Founded in 2018, Koibito Poké is the leading Arizona poké restaurant influenced by traditional Hawaiian and Japanese flavors and ingredients. Koibito Poké (Koibito meaning “love” in Japanese) to show their bodies some love — by providing them with fresh, clean whole foods that are good for them and taste good too. Koibito Poké is co-founded by former MLB Pitcher and 3-time World Champion Todd Stottlemyre who has led the brand’s expansion throughout Arizona. The restaurant is expanding its concept with franchises across the country.