This event was hosted by Land Advisors Organization and WESTMARC

“Washington is not a place to live in. The rents are high, the food is bad, the dust is disgusting, and the morals are deplorable. Go West, young man, go West and grow up with the country.” —Horace Greeley, New-York Daily Tribune, July 13, 1865

The West Valley is no longer the lightly-talked-about region of Metro Phoenix it once was. It is now home to an expanding population, diverse workforce and booming housing construction. 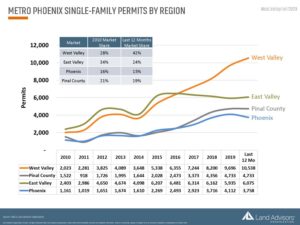 With the completion of the Loop 303 and the Loop 202 South Mountain Freeway connecting the East Valley to West Phoenix, business leaders, real estate experts and developers throughout Arizona predicted another wave of smart development around the new transportation corridor to continue the region’s strong economic growth.

That prediction has come true.

“It’s exciting to see the amount of activity in the West Valley. We’re seeing a huge demand for everything from commercial to master-planned communities,” Greg Vogel, founder and CEO of Land Advisors Organization, said on the 2020 West Valley Land & Housing Forecast webinar, presented September 9th.

“The West Valley offers unique assets,” Hoffman said. “Regionalism is all about working with varied communities. We are raising kids here. People are choosing to live in the West Valley. It has been described as having big-city amenities with a small-town feel.” 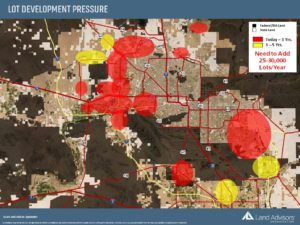 The West Valley leads Metro Phoenix in numerous home-building categories that range from entry-level to luxury single-family options as well as built-to-rent, according to Vogel. He touts the affordability and value that the West Valley offers because of good, careful planning that provides a wide mix of uses and open space that is popular to those seeking convenient access to recreational space. While some of the data is impressive and jaw-dropping, there are also some figures that are raising concern. 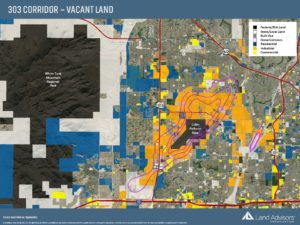 Land transactions have totaled $1.25 billion in the last 12 months alone. There is a need to add 25,000 to 30,000 lots throughout Metro Phoenix each year and the West Valley is predicted to need most of these lots. “There is a lot of migration, particularly from California, and the West Valley is ripe for development,” Vogel said. “Metro Phoenix population is increasing by 90,000 people annually, which indicates a need for 27,000 single-family homes and 8,000 multi-family housing units to be added annually,” he added. According to Vogel, 57% of the demand for new housing is in the West Valley.

The appeal of the West Valley to builders and developers is further evidenced by the 162 planning and zoning applications filed between 2019 and today. “Over the next decade, we anticipate the need for nearly 200,000 new residential housing units in the West Valley to accommodate over 550,000 people moving into the region,” stated Vogel.

However, the region is experiencing a “chronic shortage.” The most telling statistic: There is a 13-day supply of homes selling for $350,000. In comparison, in a normal market, there is a four-month supply; 27 days for all listings.

The takeaways from the webinar also illustrate West Valley muscle:

Peter Madrid is with Phoenix-based MadridMedia.