Report: The Opportunity, Emotion and Trends Behind the Great Reshuffling

The pandemic brought changes that make people more likely to move; a rapidly evolving real estate industry is helping overcome emotional and logistical obstacles that can get in the way.

The pandemic has upended the meaning of home and prompted many of us to rethink how and where we want to live. A new Zillow survey finds more than 1 in 10 Americans (11%) say they have already moved in the past year — by choice or by circumstance — contributing to the Great Reshuffling, and millions of additional households could enter the real estate market as a result of the pandemic.

Moving remains challenging, but it can bring more opportunity now than ever before, thanks in part to the rise of remote work. That inspired Zillow to publish its first ever Mover Report, a data-based dive into the people and emotions driving moves this spring home shopping season. Here’s what we found:

People want or need to move, even in a pandemic

Zillow research has found a significant number of homeowners say they’re more likely to move and sell their home as a result of the pandemic, representing an additional 2.5 million households that could enter a real estate market already driven by unrelenting demand.

Life and financial uncertainty are among the top reasons homeowners have not listed their home for sale during the pandemic. The COVID-19 vaccine is likely to change that and prompt many more people to move. Zillow data finds a large majority of homeowners (70%) say they would be mostly or completely comfortable moving to a new home when there is widespread vaccine distribution.

More than 1 in 10 Americans (11%) have already moved during the pandemic, according to a new survey from Zillow conducted online by the Harris Poll. Among those recent movers, three quarters (75%) say they moved for positive reasons, such as being closer to family or friends or living in an area they’ve always dreamed of. New flexibility to telework has opened up those opportunities for many, and new real estate technology, like Zillow’s 3D home tours and interactive floor plans, has enabled movers to get an immersive experience of a home from hundreds or thousands of miles away, offering added confidence for buyers shopping remotely.

Phoenix, Charlotte, N.C., and Austin, Texas, saw the highest net inbound moves in the first 11 months of 2020, as recent movers sought out relative affordability and warmer weather. Those Sun Belt metros are expected to continue to surge in 2021. Zillow’s panel of experts predicted the Austin and Phoenix housing markets will outperform the national market this year.

“The pandemic brought an acceleration of trends we were seeing in 2018 and 2019,” says Zillow senior economist Jeff Tucker. “More affordable, medium-sized metro areas across the Sun Belt saw significantly more people coming than going, especially from more expensive, larger cities farther north and on the coasts. The pandemic has catalyzed purchases by millennial first-time buyers, many of whom can now work from anywhere.” 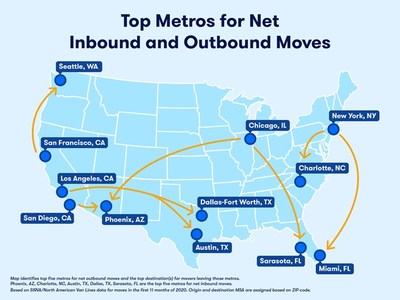 The pandemic brought the rise of Zillow surfing as people look to escape their reality or create a new one. But the path from dreaming to moving can come with financial, logistical and emotional obstacles.

Those concerns have merit: about half of all recent movers say they experienced stress (55%) and anxiety (48%) during their most recent move. 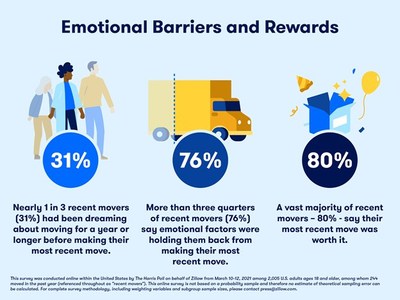 Many recent movers say starting a new chapter in their life was among the most rewarding parts of moving to a new home. Nearly 3 in 5 recent movers (59%) say positive life events happened after their most recent move, most commonly citing that they fulfilled a dream or became passionate about something new.

That’s what happened to Darren and Yolande Rollinson of Dallas, Texas, who say their two children were elated when they moved into their new home. The Rollinsons had been living in their self-described starter home for 24 years and needed more space, but they had put off a move because of their demanding jobs and concern over the stress of home buying and selling.

The Rollinsons found their solution by selling to Zillow Offers. They avoided repairs, open houses and showings, and they got to set their closing date, allowing them to move into their new home in less than a month. Their Zillow Offers advisor walked them through the whole process, which they described as “peaceful, productive and well planned out.”

“The future for us is growth,” says Darren Rollinson, who works in the medical field. “Now we believe we can do anything. We know we’ve made an achievement. We can keep on growing and take bigger steps.” (Watch the Rollinsons’ moving story here.) 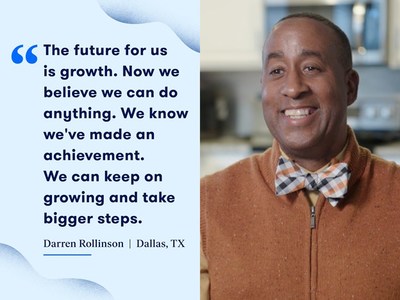 Tech tools are making it easier to move

The pandemic accelerated the development and adoption of real estate technology that has helped eliminate some of the most stressful parts of a move. Virtual tools like Zillow’s 3D home tours and interactive floor plans make it faster and easier to shop for a home and winnow down the options.

Today’s buyers overwhelmingly want those tools to be available during the home shopping process, according to Zillow research. Nearly four in five (79%) Americans would like to view a virtual tour and a digital floor plan if they were shopping for a home. Homes on Zillow with a 3D Home tour were saved by buyers 32% more than homes without, and got, on average, 29% more views than listings without.

High-tech services like Zillow Offers can remove the anxiety and uncertainty of selling a home traditionally, and timing the sale with the purchase of a new home. Financing and closing services through Zillow can also happen digitally, allowing buyers and sellers to transact remotely.

… but a partner can make change possible

A trusted real estate agent can be a steady hand, guiding a home buyer or seller through the entire process. Zillow Premier Agents are local experts who understand a move is both a physical and emotional journey.

Cierra DeVille, a Zillow Premier Agent with Active Realty in Irvine, Calif., relied on empathy and compassion to help a Nashville-based family manage the stress of a cross-country move. By listening to their unique needs and using her local knowledge, DeVille found them the perfect off-market property.

“The excitement and gratitude they had when I was able to get them exactly what they wanted in the timeframe they wanted was pure joy,” says Deville, who helped get the family into their new home before their daughter’s fifth birthday. “There’s nothing better.”

Zillow Group, Inc. (NASDAQ: Z and ZG) is reimagining real estate to make it easier to unlock life’s next chapter.

As the most-visited real estate website in the United States, Zillow® and its affiliates offer customers an on-demand experience for selling, buying, renting or financing with transparency and nearly seamless end-to-end service. Zillow Offers® buys and sells homes directly in dozens of markets across the country, allowing sellers control over their timeline. Zillow Home Loans™, our affiliate lender, provides our customers with an easy option to get pre-approved and secure financing for their next home purchase. Zillow recently launched Zillow Homes, Inc., a licensed brokerage entity, to streamline Zillow Offers transactions.

North American Van Lines, Inc., established in 1933, is a wholly owned subsidiary of SIRVA Inc., a leader in providing relocation solutions to a well-established and diverse customer base around the world. The moving company, with headquarters in Fort Wayne, Indiana, and more than 500 agents worldwide, handles corporate, government, military and private relocations, and operates in the U.S., Canada and more than 100 countries worldwide.  I