Woodinville, Washington, is Zillow’s® most popular market of early 2022, leading a list of fast-growing suburbs as the most in-demand places to start off the year. As more evidence emerges that remote work is a driving force behind fast home value growth in the suburbs, expensive suburban markets are seeing strong demand. Gilbert, Arizona is the top suburb by price for the Greater Phoenix market.

Zillow analyzed its page-view traffic, home value growth and for-sale inventory for more than 1,000 cities to come up with the site’s most popular U.S. markets. Woodinville, located outside of Seattle, topped the list. Following close behind were Burke, Virginia, in the Washington, D.C., area; Highlands Ranch, Colorado, outside of Denver; Westchase, Florida, near Tampa; and Edmonds, Washington, also in the Seattle metro.

“The most popular markets so far this year paint a picture of how remote work has changed the U.S. housing landscape,” said Zillow economist Nicole Bachaud. “Demand for suburban homes found an extra gear last summer, perhaps as buyers gained more clarity in their employers’ return-to-office policies. Research suggests the rise of remote work is responsible for roughly half of home price growth during the pandemic. How many employers continue to allow this flexibility for employees to live where they choose will go a long way toward determining which markets are most in demand in the future.”

Especially strong home buyer interest has caused suburban home values to grow faster than home values in urban areas, a reversal of previous norms and from the first 15 months of the pandemic. Remote work is a driving force behind this shift, prompting home buyers to prioritize affordability and space over a short commute. More than half of the gain in U.S. home prices since late 2019 can be attributed to remote work, according to research from the National Bureau of Economic Research.

Regionally, Havertown, Pennsylvania, outside of Philadelphia, is Zillow’s most popular market in the Northeast, edging out four Boston suburbs: Billerica, Framingham, Waltham and Arlington. In the central region, Ballwin, Missouri, near St. Louis, is joined in the top five by Grand Rapids, Michigan, and three pricey Dallas suburbs: Coppell, Plano and Prosper. Denver suburbs dominated the mountain region, taking the top eight spots in Zillow’s rankings.

If a buyer has their eye on a home in one of Zillow’s most popular markets, they can likely expect competition. Zillow’s five tips for winning a competitive bid can help. Mortgage rates are also changing quickly and can have a significant impact on a home buyer’s monthly mortgage payment. Zillow’s mortgage calculator is a tool that can help buyers stay on top of their finances during their home shopping experience. 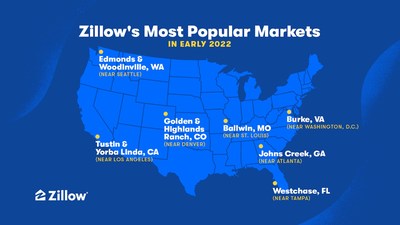 Zillow Group, Inc. (NASDAQ: Z and ZG) is reimagining real estate to make it easier to unlock life’s next chapter. As the most visited real estate website in the United States, Zillow® and its affiliates offer customers an on-demand experience for selling, buying, renting or financing with transparency and ease.