By Eric Jay Toll for PHXNewsroom 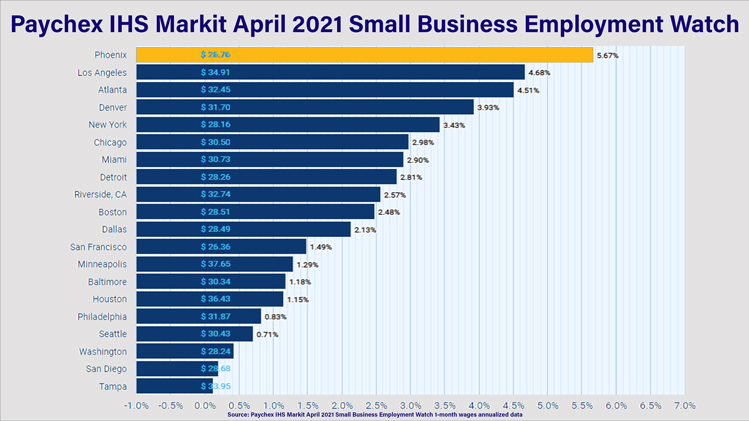 P​hoenix topped the nation with a 5.67 percent hourly wage hike, based on one-month annualized wage growth data, in small businesses compared to a year ago, according to the monthly Small Business Employment Watch from Paychex IHS Markit.

The average metro area small business is currently paying wages of $28.26 per hour. The U.S. average is $29.09, increasing only 2.84 percent.  Arizona ranked third in wage growth, with a 4 percent increase over last year to $27.11. Missouri’s 4.84 percent growth was tops in the nation, and Georgia was second with 4.4 percent. Wages rose more in the Northeast, up 3.7 percent, followed by 2.94 percent in the West. The South lagged behind the other regions reporting a 2.09 percent wage gain for small business workers.

Nationally, job gains in April marked the first month in the last 12 in which all regions of the country showed positive growth rates. The West led the regional list with 4.26 percent in job gains. The Midwest was the lowest with a 3.31 percent job gain. According to Paychex, the national average for job gains is 3.92 percent.

The monthly Small Business Employment Watch from Paychex IHS Markit calculates job and wage gains based on the data generated by businesses using Paychex for payroll and human resource services. Over the past year, Phoenix has shown substantial numbers in both jobs and wage gains, holding a steady ranking among the top tier of metro areas measured by Paychex.