Most States Are Well Prepared to Weather a Recession, Not Arizona 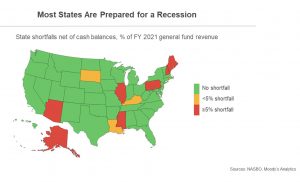 The majority of US states have the resources needed to get through an economic recession, according to a new study from Moody’s Analytics. A record 43 states have the cash they need to weather an economic slump without having to resort to severe spending cuts or tax increases.

“States have never been in a better position to make it through a recession,” said Emily Mandel, the study’s author. “State policymakers seem to have learned a valuable lesson from the Great Recession, a period when tax revenue losses far outstripped savings.”

The Moody’s Analytics study examines how well a state’s finances can carry it through an economic downturn. Economists at Moody’s Analytics ran stress tests on all 50 states to arrive at an estimate of each state’s recessionary needs in the event of a moderate recession. The study takes into account the impact of the business cycle on state revenues and spending over two fiscal years.

While the stress test results find most states prepared for a recession, there is some variation in their degrees of readiness, according to the study. In total, 39 states have the funds to significantly reduce stress from a recession. Four states would have to raise taxes or cut spending by less than 5% of their budgets. However, seven states would have to resort to spending cuts or tax increases of more than 5% of their budgets.

States overly dependent on tourism and consumer spending will be most hard hit during a recession, according to the study. States with agriculture and energy-based economies are better positioned to weather the storm.

The bottom five states with less than a 10% revenue gap are:

In contrast, the states most flush with cash are:

To protect their budgets from increased volatility and fiscal drag, state and local policymakers should consider investing in their budget processes and make stress-testing a higher priority. “States may want to consider formulating targeted reserve levels,” Mandel added. “Planning for a recession requires putting away enough money today to prepare for a future downturn, without stunting economic growth.”