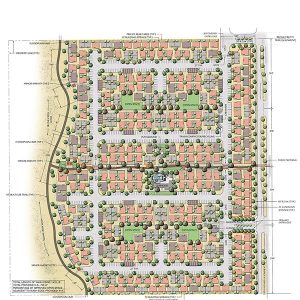 The Empire Group of Companies closed last month on a 40-acre parcel located in North Phoenix near the site of the $12 billion Taiwan Semiconductor Manufacturing Company facility that is projected to open in 2024, where it plans to build a community of 354 single-family build-for-rent homes. Village at Bronco Trail will be situated at 29th Avenue and Sonoran Desert Drive, just east of the I-17. The Scottsdale-based developer purchased the land for $14.37 million and is scheduled to break ground and start construction by late 2022.

“This is an ideal site, located directly across the I-17 near TSMC where they are projected to generate more than 3,000 jobs over the next two years,” explains Richard Felker, founding partner of Empire Group. “This community will help provide much-needed housing for employees at the TSMC Semiconductor plant and others moving to this rapidly growing area.”

Village at Bronco Trail will offer a mix of one-, two- and three-bedroom units for lease in a gated community that includes a mix of lifestyle amenities. Each home includes private landscaped backyards with doggy-door access, a smart-technology home package, open floor plans with spacious living areas and closets with ample storage.

Residents will also enjoy community walking paths, a clubhouse that includes a lounge, kitchen and fitness center, a resort-style pool and jacuzzi, barbecue and firepit areas along with a community dog park and dog wash station, a mix of covered, uncovered and garage parking.

Brett Rinehart, Ryan Semro, and Ben Heglie of Land Advisors Organization represented the Empire Group in the purchase of the 40-acre parcel.

The Empire Group is currently under construction on six build-for-rent projects in cities throughout Maricopa County, including Goodyear, Phoenix, Peoria, Avondale, Tolleson and Queen Creek. The developer has another five build-for-rent communities throughout Greater Phoenix that it is scheduled to break ground on by the end of the year.