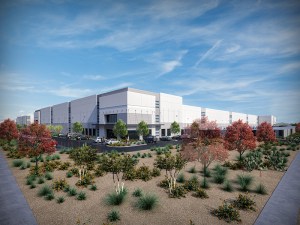 Taking shape on a 39-acre parcel at the intersection of 101st Avenue and Van Buren Street within the Southwest Valley submarket, the development represents the second phase of Avondale Commerce Park. CommercialEdge information shows that the project’s Phase I, dubbed 101 Logistics Park, came online in 2020; the same year, PGIM Real Estate acquired it in a $425 million portfolio transaction.

The development team also includes DLR Group as project architect and Willmeng as general contractor. Delivery is slated for July 2022.

“Considering the continued unprecedented level of demand for industrial and e-commerce related uses as well as the strong population growth in the Southwest Valley, 101 at Van Buren is designed with the infrastructure and amenities to support the market’s most active industrial users,” Jason Quintel, senior vice president of the Western region at Seefried, told Commercial Property Executive.

Once completed, the speculative development will comprise two warehouses of 408,581 and 224,740 square feet, respectively. The single-story buildings will have 32- and 36-foot maximum clear height, 159 dock-high doors and 116 trailer stalls. The development site is roughly 13 miles west of downtown Phoenix and 2 miles east of Fairway 10, Westcore’s 720,000-square-foot speculative industrial campus delivered this August.

JLL’s Marc Hertzberg, Anthony Lydon, Riley Gilbert and John Lydon will spearhead the leasing and marketing efforts at the property.

There’s no stopping Greater Phoenix’s industrial boom, as new development soars in the metro that was named one of the top 10 markets to watch in 2022. According to a recent Colliers report, there were roughly 20 million square feet of industrial space underway across The Valley at the end of the third quarter. Of the total, 15.5 million square feet were under construction in the West market cluster, 95 percent of which pertained to warehousing and distribution space.

The same dataset shows most new industrial construction is built on a speculative basis, with the availability rate at 71 percent. The metro’s largest ever industrial spec project broke ground in September, when CapRock Partners kicked off construction of a 3.4 million-square-foot campus located 10 miles west of downtown Phoenix. Other recent groundbreakings include Latitude 303 Logistics and Falcon Park 303, both underway in Glendale, Ariz.

Planned developments also make up an important part of the metro’s future inventory. In September, Lincoln Property Co. teamed up with Harvard Investments for the acquisition of 585 acres in Goodyear, Ariz., where they intend to develop an industrial park with up to 7 million square feet of space across 20 buildings. Earlier that month, two other developers filed construction plans with the City of Glendale, aiming to bring a combined 3 million square feet of industrial space to the area.