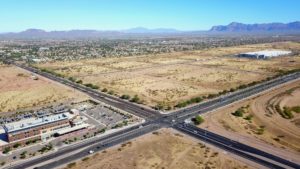 A 17-acre mixed-used development at the northeast corner of Ellsworth Road and Elliot Road in Mesa, Ariz., is poised to take off in a huge way. The Elliot Tech Corridor, which will include Apple, Edgecore, Amazon, Dignity Health and Google, among many others, will now also be the site of the $800-million Facebook data center recently announced. The development is directly north of the Phoenix-Mesa Gateway Airport, a hub to over 1.5 million travelers annually. There is only one “hard” corner for retail at the front of the Tech Corridor and it’s located at East Gate Plaza.

The developer directly in front of it is Diversified Partners, based in Scottsdale, Ariz., and it has plans for East Gate Plaza to include retail, hospitality, medical and office components. The Plaza is across Elliot Road from the planned Facebook facility. Diversified Partners closed escrow on the land in August 2021.

East Gate Plaza is also adjacent to Eastmark, the number one master-planned community in Arizona, with 15,000 homes at completion. Ellsworth Road has the highest traffic volume in the City of Mesa, which has a population of 538,146.

“We are delighted with the news about Facebook’s facility going next to our development,” said Walt Brown, Jr., founder and CEO of Diversified Partners. “The explosive commercial growth along both Elliot and Ellsworth, proximity to three freeways, the expanding Phoenix-Mesa Gateway airport, new sports complex and thousands of new homes planned and underway are great indications that this project will be serving a much wider future audience, which will be in need of various amenities we will gladly provide.”

“We can’t underestimate the impact the new Legacy Sports Park will have on Mesa and surrounding areas. Families have had to travel great distances for tournaments and sporting events but will now have access to the largest privately owned sports complex in the country, which is slated to open in Q1 of 2022. It’s the only large-scale retail tenant and center of the Corridor.”

Diversified Partners has multiple East Gate Plaza deals in process that include a hotel, restaurants, retail, coffee, brewery, dessert concept, nail salon and dental/orthodontic, to name a few. Key points about the project include that: