CBRE has facilitated one of the metro’s largest office financing deals so far this year. 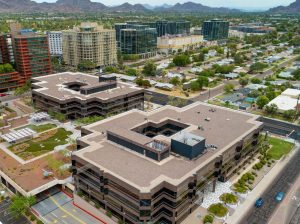 Elevate 24 is one of the 12 office holdings Regent Properties owns in the Valley, according to CommercialEdge information. Regent acquired the Class A asset in 2017 for $66.4 million from McCarthy Cook.

Completed in 1986 and most recently renovated in 2019, the office campus occupies nearly 5 acres at 4722 and 4742 N. 24th St. The buildings feature four above-grade and three subterranean levels. Amenities include a conference center, a 3,000-square-foot fitness center and 10 collaborative meeting areas, as well as the 1-acre Deck park with bocce ball and croquet.

One of the largest financing

CommercialEdge data shows Elevate 24’s refinancing is one of the largest financing deals that have closed in the Phoenix office market since March. The top transaction was the $68 million loan that accompanied the $110 million sale of PetSmart’s headquarters.

According to a recent CBRE report, net absorption for Phoenix office product in the first quarter of 2021 was the third-lowest in history, with vacancy rising to 19.1 percent. And despite a slight decrease to roughly $28 per square foot, the average listing rate was the second-highest ever recorded.