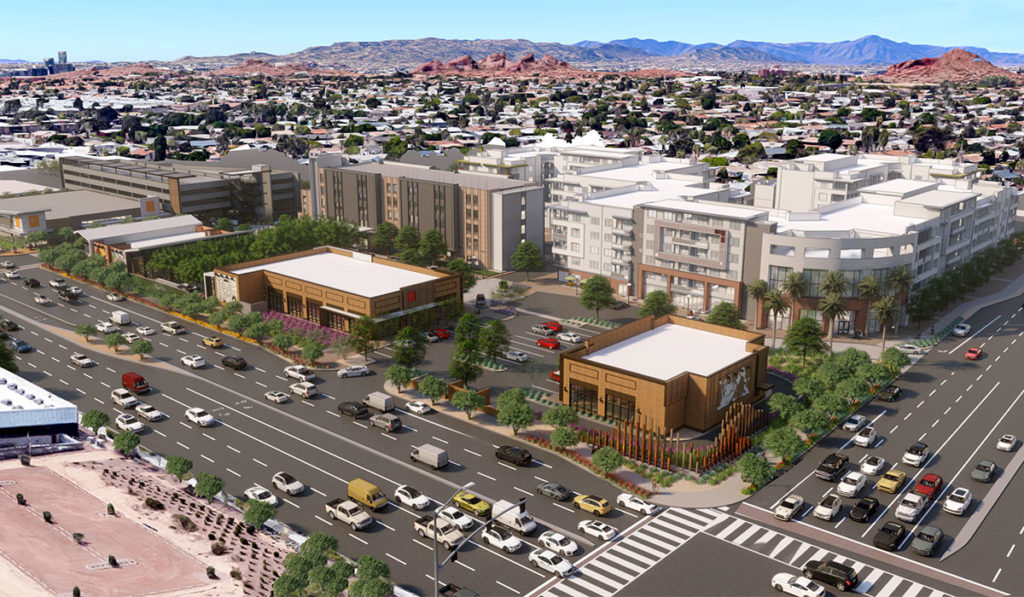 Papago Plaza, the mixed-use redevelopment of the prime southwest corner of Scottsdale and McDowell roads, is beginning infrastructure work in south Scottsdale this month.

The 11-acre legacy property will include an 80,000-square-foot Marriott Hotel; 50,000 square feet of grocery, restaurant and retail; 276 luxury apartment units developed by Alliance Residential; and a 275-car parking garage.

The new Papago Plaza will replace the iconic, Pueblo-style retail center originally built in 1962, which I acquired in 2015. The project will use specific components of the old Papago Plaza, including the metal Kachina that was prominent on the original signage as part of a new mural that will be positioned along Scottsdale Road. The reclaimed heavy timbers that were part of the 1962 structure will also be used as accents in the new project. The architectural theme will be adaptive reuse with brick, reclaimed wood and steel accents.

Serving as a catalyst for the revitalization of the south Scottsdale corridor and a significant boost to the area’s economy, the redevelopment of the plaza is important to Mashburn, an Arizona resident of more than 35 years. The site is viewed as a significant entry point to the City of Scottsdale from the south, and the project’s quality, design and character is paramount to Pivot Development.

Even with pandemic-related market issues, there seems to be a continued demand for retail and restaurants in good locations. Leasing velocity has increased, interest is high and the cost of building is less right now.

The first buildings are on track with a planned opening of late spring 2021, while the entire project is anticipated to be complete in December of 2021.