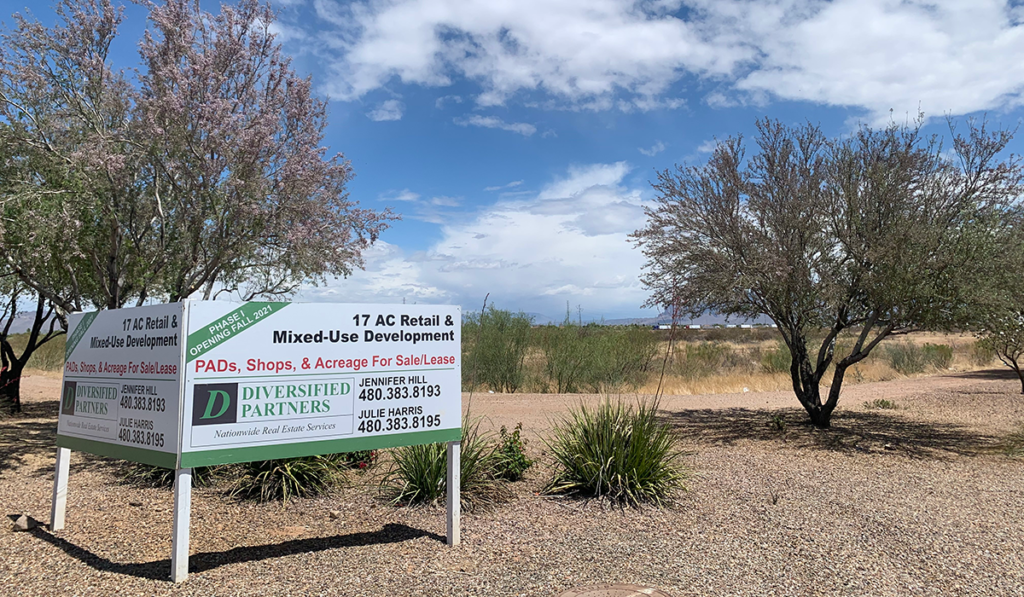 East Gate Plaza, a 17-acre mixed-use development by Scottsdale-based Diversified Partners in the Elliot tech corridor in Mesa at northeast corner of Ellsworth and Elliot roads, will include medical, office and retail components. Diversified Partners has multiple deals in process that include restaurants, retail, convenience store/gas station, coffee, dessert, nail salon and dental/orthodontic users, to name a few. “We are creating a destination community, playing off the tech corridor theme, which means there will be lots of glass, angular lines and rich materials such as masonry, rollup doors and exposed steel elements,” says principal architect and EDIFICE owner Dane Astle.

East Gate Plaza is directly north of Phoenix-Mesa Gateway Airport, a hub to more than 1.5 million travelers annually. The development is also adjacent to Eastmark, the No. 1 master-planned community in Arizona, with 15,000 homes at completion. Ellsworth Road has the highest traffic volume in the City of Mesa, which has a population of 511,000.

“We are creating a collaborative environment where people will come to work, take coffee breaks on benches under the trees and stay for the retail and restaurant experiences. By including a fueling station, we are adding to the full campus design vision,” Astle says. “The site will be very activated with architectural touches to make it stand out.”

“The explosive commercial growth along both Elliot and Ellsworth, proximity to three freeways, the expanding Phoenix-Mesa Gateway airport, new sports complex and thousands of new homes planned and underway are great indications that this project will be serving a much wider future audience,” says Walt Brown, founder and CEO of Diversified Partners.