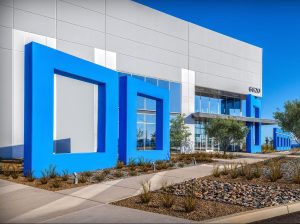 Within just a month after completion, a Lincoln Property Co.-led partnership has sold Phase I of Park 303 in Glendale, Ariz., for $186 million to BentallGreenOak. The 1.3 million-square-foot facility traded for the highest single-building industrial sale price in the state’s history.

The seller initially developed the property as two separate speculative buildings—of 705,531 square feet and 488,995 square feet, respectively—with the ability to combine them into a single facility upon market demand. The two structures were later merged to accommodate the needs of the tenant, a Fortune 1 retailer.

Fronting the Loop 303 freeway between Bethany Home Road and Glendale Avenue, the project occupies 71 acres and is part of the Park 303 master-planned industrial park. The massive development will span 210 acres and will be able to accommodate some 4 million square feet of Class A industrial space.

Executive Managing Director Will Strong of Cushman & Wakefield worked on behalf of the seller, while Lincoln Property Co. will maintain its role as the building’s property management company.

The metro has proven to be a prime location for Lincoln Property Co., as just days ago the company announced the acquisition of 585 acres in Goodyear, Ariz., with plans to develop some 7 million square feet of industrial space across 20 buildings.

The company is not alone, as the area has attracted significant interest recently. According to CommercialEdge data, 80 industrial projects totaling some 25.6 million square feet of space were under construction across the metro as of publishing time.