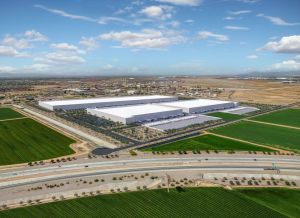 LPC Desert West, the Southwest arm of Dallas-based Lincoln Property Co., acquired 140 acres of land for $53 million in Glendale, Ariz., where it will build a $515 million, 2.3 million-square-foot industrial development.

The company plans to construct three buildings of 1.3 million square feet, 604,000 square feet and 416,000 square feet, in one single phase. Construction on Luke Field will start in the fourth quarter, with an expected delivery in early 2024.

The development, the firm’s latest industrial megaproject in metro Phoenix, is bordered by Litchfield Road, Northern Avenue, the new Northern Parkway and Luke Air Force Base. Luke Field is named for the air force base, home to the 56th Fighter Wing, part of the Air Education and Training Command, the largest fighter wing in the U.S. Air Force.

Lincoln Property Co. Senior Executive Vice President David Krumwiede and Vice President John Orsak have both served as honorary commanders for Luke’s 56th Fighter Wing. Krumwiede said in prepared remarks the ability to purchase the land and develop near the base is something they will enjoy.

All the buildings will have the same high-end “creative amenities” that LPC has become known for through other award-winning industrial projects, including the nearby Park303.

Indoor and outdoor amenities will include barbeque stations, a shaded outdoor eating area and employee collaboration spaces. There will also be extensive car and secure trailer parking.

Located minutes from Loop 303, Luke Field will be situated directly next to Northern Parkway, a new, 12.5-mile, high-capacity roadway that allows employees and trucks to circumvent traffic on Interstate 10. Northern Parkway also provides a direct, rapid connection between the Loop 303 and Loop 101/US 60/Grand Avenue. Those roadways offer strategic regional transportation connections for logistics users to destinations such as the ports of Los Angeles and Long Beach to the west in California and Nevada, and other mountain stations to the north.

Butler Design Group is the architect for Luke Field. A general contractor has not yet been selected.

The company has also completed two of the highest-priced metro Phoenix office and industrial transactions. Its major industrial developments in the region include Park303, also in Glendale. In March, LPC Desert West began construction on phase two of Park303, which will feature three buildings totaling nearly 2.5 million square feet of space. BentallGreenOak acquired the first phase, a 1.3 million-square-foot building leased to Walmart, in September for $186 million. At full buildout, Park303 will have the capacity to support nearly 4 million square feet of Class A industrial development.

In September 2021, LPC teamed with Harvard Investments to acquire 585 acres in Goodyear, Ariz., where the partnership plans to build a Class A industrial park that could deliver as much as 7 million square feet across 20 buildings. That project, known as Goodyear AirPark, is expected to also include about 10,000 square feet of retail space.