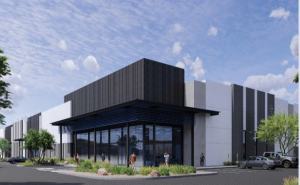 Capping an extraordinarily productive year, New York-based Wharton Industrial announced today that it has acquired a 101-acre parcel of land in Mesa, Arizona.

Financing for the project was provided by MSD Capital, LP, the family office of Michael Dell. Construction is set to begin in Q2 of 2022.

“Wharton is a strong believer in the growth of the industrial market in the Intermountain West region as more companies and individuals relocate for a more hospitable business climate and better quality of life. Markets like Mesa are becoming part of the ‘digital desert’ where forward-thinking businesses such as electric vehicle makers, social media companies, aerospace, and chip manufacturers and more are flocking,” said Peter C. Lewis, Chairman of Wharton Industrial. “The strategy to invest in this region is emblematic of our 35-year corporate philosophy of focusing on emerging markets poised for significant growth,” adds Lewis.

The site is among the last large contiguous land parcels remaining in the area and is centrally located in the highly desirable Southeast Valley submarket of Metropolitan Phoenix — one of the fastest growing industrial markets in the country and poised to lead the nation in industrial rent growth over the next five years. The area has an extraordinary collection of “new age” companies such as Google, Facebook, Microsoft, Apple, Lucid, Taiwan semiconductor and Apple attracted by the area’s talented labor pool, low cost living, favorable business climate and the ability to service major West Coast population centers.

Wharton Industrial’s other holdings and past developments include SoPhi Logistics Center, a formerly defunct 280,000 SF railcar facility in Philadelphia which Wharton transformed into a first-class last-mile delivery facility and was later leased to Amazon in its entirety.

Wharton Industrial, a platform company of real estate investment firm Wharton Equity Partners, is a leading investor and developer of industrial real estate, with a robust pipeline of properties across the Eastern Seaboard, Florida and the southeast. Steered by the company’s forward-thinking leadership team, Wharton has been extremely active in the industrial sector since 2017 acquiring last-mile distribution facilities in proximity to major urban markets as well as developing big box spec development projects in the southeast. To date, Wharton Industrial has completed over $700 million in transactions, spanning nearly 11 million square feet.  Wharton Equity Partners is an innovative real estate investment firm with extensive experience acquiring, developing and operating a wide range of real estate asset classes since its inception in 1987. The firm also has a venture capital arm, Wharton Equity Ventures, that is an active investor in growth companies targeting multi-billion markets.

MSD Partners, L.P. is an SEC-registered investment adviser that utilizes a multi-disciplinary strategy focused on maximizing long-term capital appreciation by making investments across the globe in its core areas of expertise – Credit, Real Estate, Private Capital and Growth. MSD Partners was formed in 2009 by the partners of MSD Capital, L.P., which is the family investment office for Michael Dell, the Founder & CEO of Dell Technologies. MSD Capital was originally established in 1998. Michael Dell and his family are substantial clients of MSD Partners. MSD Partners operates from offices in New York, Santa Monica and West Palm Beach.